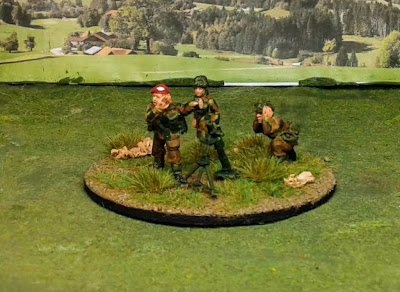 I managed to put the finishing touches on my platoon of WWII British Paratroopers for Chain of Command.  I managed to do all of the helmeted models first, leaving those with Berets for last.  In addition, managed the first of a several planned add-ons in the form of this light mortar team from the Warlord Games command pack of Bolt Action. 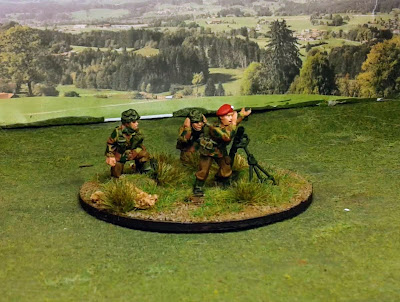 The models were done with the same approach I used for the others with the jackets:
The models also received a base coat of VJ English Uniform brown with the GW Contrast Aggros Earth used to as a wash for the pants.  The leggings and kit used VJ Gray-Green as a base with GW Miltarum Green as a wash for the canvas components and VJ Miltary Green wash for weapons, ammo, grenades, etc.  The weapons are just AP Matt Black with a drop of VJ Metal Effect mixed in to give it a brushed metal sheen.  Finally, the berets are AP Dragon Red with GW BA red used for the shading.

I now have more than enough figures to fill out the first platoon + a small command group.  I have a few personality figures to go, as well as MMG stand.  Otherwise I have managed to replicate most of my old 20mm collection now in 28mm.

I may eventually have to get a Tetrarch as well, but only because tanks are always awesome....\