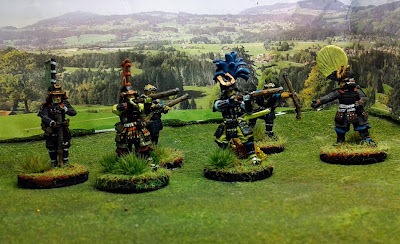 I also managed to knock out the rest of my first set of Perry Samurai with Teppo.  These are excellent sculpts, with some personality thrown into the design. I think my favorite  touch is the loyal retainer passing a loaded handgun over to his noble lord.  It seems very in character for the period for the higher ranking Samurai to have someone else do the grunt work for him.

The only problem with little vignettes like this is that they work better for based units than in Skirmish games.  On their own they make for a strange pose.  I guess I could use them for a Sengoku era remake of Stripes:  The Ashigaru is apparently passing his weapon off ala John Candy.  , and the
other is obviously Captain Stillman (John Larroquette) ordering someone to "have that removed." 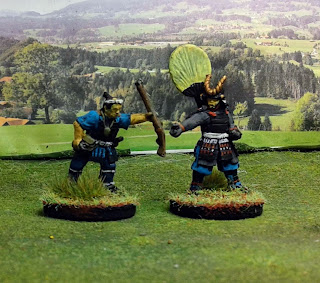 The other two sculpts include an apparently less affluent samurai loading his own weapon, and another retainer who is also loading a weapon for Stillman-san above and carrying everyone's rations to boot! 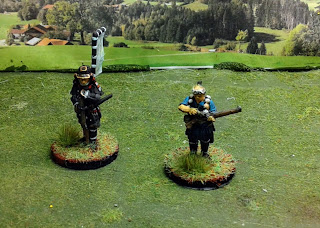 For the sake of completion I am adding the other two as well. 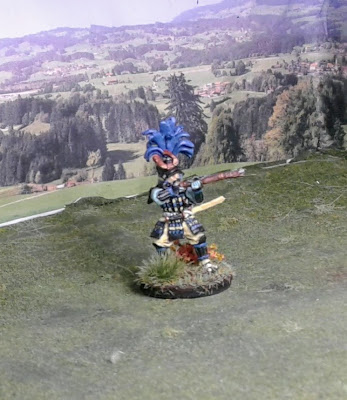 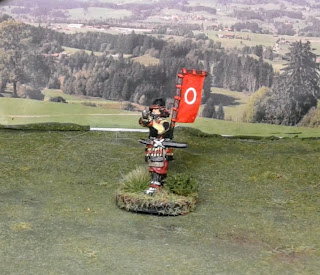 Test of Honor strangely does not allow you to give a Teppo to your Samurai as it would be 'Too dishonourable" That is the problem with basing your game off the interpretation of Samurai in the Edo period rather than when they were actually working for living.

I have one more pack of these to complete, which will be done with a red base for the honor to allow them to play for the "REDFOR" side of my collection.  Fun stuff.
28mm Lion rampant Perry Miniatures Samurai Test of Honour