Horvat Hussars and another Zorndorf Milestone! 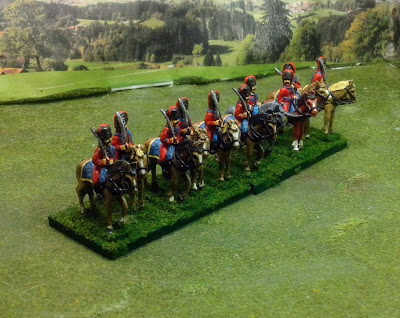 I give you my version of the 1st Novoserbskiy Hussars.  (They have the same uniform as the Moldavian Hussars I did earlier, so not very groundbreaking.)  There were 10 Squadrons from this regiment present at Zorndorf (twice the size of the other three Hussar Regiments), so I opted to represent them with two separate regiments of 10 figures each. 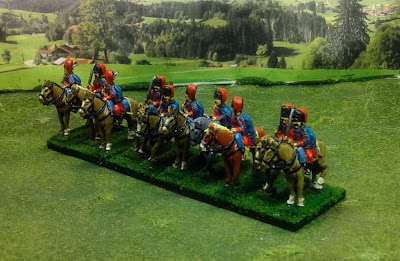 I stayed with my normal color coding system for this group so the primary horse color is tan, with darker colors reserved for the commander and trumpeter. 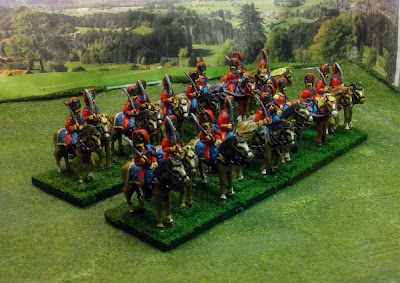 I also opted to use Eureka Hussar models for this unit as opposed to the massive number of Blue Moon Figures I have painted to date. These models are cast as a single piece, and are fairly large in comparison.  As you can see below, they dwarf their Blue Moon counterparts:

The Blue Moon models are a little more dynamic/detailed but still seem to suffer from the "looking off to the right" phenomena that afflicts 50% of Eureka cavalrymen.  I did find the Eureka models much easier to paint, and the larger size allows the color difference to be a little more striking.  I do like Blue Moons more dynamic poses, although Eureka's Russian Curassier's are very dynamic sculpts in their own right.  I plan to add two more stands of those models down the road at some point.
These two units do mean that I have completed another Division for the Zorndorf project: Demiku's Left Wing Cavalry Division.  It includes twenty squadrons of Hussars and ten of Curassier and six of Dragoons (The Kazan Curassier were still wearing their Dragoon uniforms)

Thus it is time for another group photo: 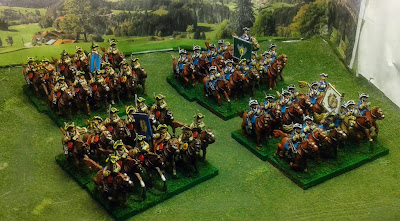 And why not a family photo of the whole Division with the commander:

This also means that all of the cavalry for the project is now complete as well: 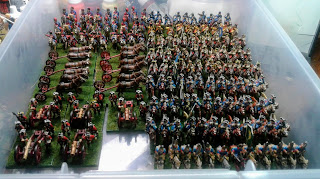 With just under 2 months left I still need to complete:

Now if I can just avoid all the distractions.....