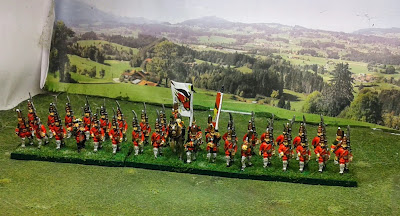 The expansion of the Grenadier regiments is now complete, with the 3rd Grenadier Regiment brought up the appropriate size.  As with the other Grenadier regiments, the unit had significantly more troops than the comparable line regiments of musketeers.  The third was the largest of the four with roughly 2000 troops in the battle (versus the 800-1200 of the line units)  As such, I opted to base these on three 60x30mm bases rather than the normal single 120x30mm base.  This allows them to be reorganized to fit the rule set, or just to use the wing stands in other scenarios to represent combined Grenadier Battalions.

This brings Saltykov's Division past the half way point, as it is now just down to the last four Musketeer regiments to round out the force.

With the Horvat Hussars nearing completion as well, it looks like I will have both Cavalry Wings completed by the end of the month.  That just leaves 10 Observation corps figures and some cannons to go.  So far it still looks good to have the collection ready for the anniversary in August.
18mm Blue Moon Honours of war Russia SYW Zorndorf