I managed to finish the last four command stands for the project.  It includes 2 Corps Command stands (3 Figures) to represent both an Army commander and a potential lieutenant general as well. 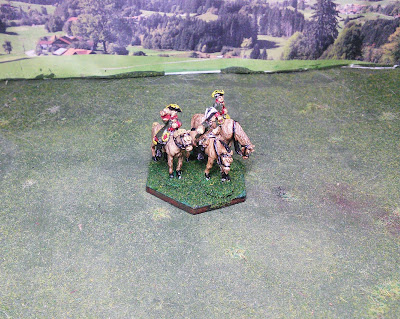 I tried to do a mix of uniform items to help differentiate the identical poses from the Eureka figs as well as to reflect the normal eccentricities in uniform that are often seen with General Officers.

I had enough figures with the "Marshal" pose to do Fermor using either Blue Moon or Eureka figures.  I guess I ordered a few too many in this case.


All told this gives me two commanders with cavalry escort to reflect the two wing cavalry commanders, Three division commanders to reflect the three lines (Saltykov, Browne and Galytsin) and an Overall Commander with deputy.  More than enough to represent the leaders present at Zorndorf.  I suppose I can this one milestone achieved.