The Boys from Pskov

A second regiment crosses the painting table, this time the Pskovskiy Infantry. 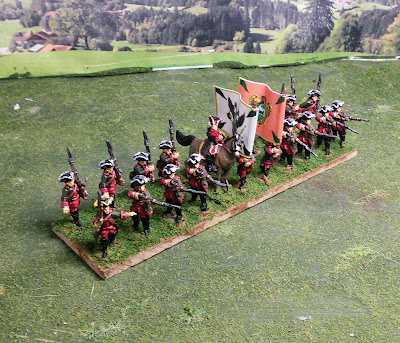 This is another group of Blue Moon Infantry from the same bags that produced the last one.  Basically I picked up a bag each of March Attack and Musketeers Firing plus a couple bags of command.  That is enough to do four regiments for the initial brigade.

I am still experimenting with the paint scheme.  For the first two regiments I went with a simple black undercoat and then painted over all the vests, trousers, turnbacks, etc in white before applying a mix of AP Dragon Red and Pure Red.  The coats are in VJ Russian Green, because why not? 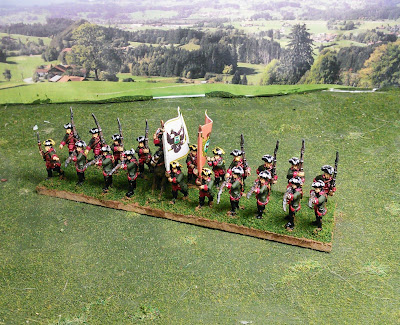 My favorite part of starting a new project like this is in the planning.  For this one I am looking at the OOB's for Zorndorf and Gross-Jaegersdorf.  The first five regiments, for example, will be part of Vanguard infantry for Gross-Jaegersdorf along with my initial Heavy and Medium cavalry.  I plan on doing seven regiments in with their green coats.  (Five Musketeers, 1 combined grenadiers and 1 Grenadier regiments) then an additional seven in Summer uniforms.  Hopefully, by that point, Blue Moon will have completed the Observation Corps figures.
18mm Blue Moon Honours of war Russia SYW