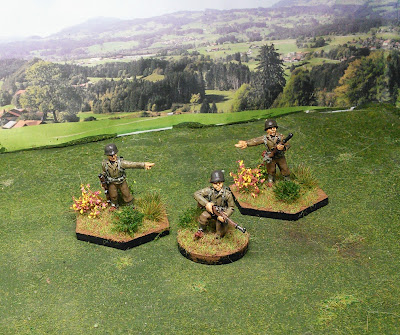 A sizable delay between posts, but I actually completed a small stack in the lead pile!

I finished the balance of the figures from the Brigade Games Disposable Heroes Kickstarter.  With Able Squad out of the way, it was time to finish Baker and Charlie

The set also came with a Platoon headquarters element included Platoon Leader, Platoon Sergeant, Bazooka Team and Runner(Runner is on the top photo)

One of the stretch goals was a two man Flamethrower team: 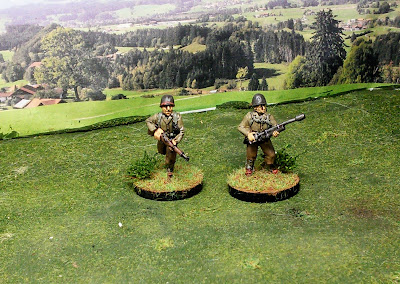 This makes for a complete US infantry platoon for Chain of Command.  Long term I will need to pick up at least 1 MMG or HMG stand.  I also want to get some Half-Tracks to field them as an Armored Infantry platoon instead.

I still need to complete a couple LMGs for my US Airborne platoon, but otherwise have the Allied side covered.  If I opt to keep expanding this project, it will probably be with German Falschirmjaegers.  Jonathon already has the German Infantry and Gebergsjaegers represented.  Still, too many projects to paint, not enough time to play...
28mm Chain of Command US Army WWII