I decided to get in on Brigadier Game's Disposable Heroes Kickstarter last Spring and pick up a standard US Infantry Platoon for North West Europe.It's been about a year since I last played Chain of Command, so I figured I should add to the mix a little bit.

First up, I finished a single Infantry Squad with a mix of advancing and firing figures.  The Brigade Games minis are best described as "plastics in metal"  Each sculpt is two pieces:  Head and body, and the detail looks like it came from a 3D printed master.  For example the e-tool handles on the back have no separation from the torso. 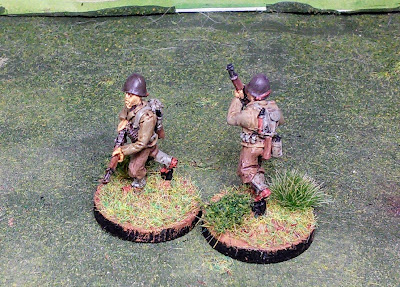 Canteens, assault packs, and other details look identical down to minute details.  Which is not necessarily a bad thing, as you are getting a good mix of poses, so it doesn't really stand out.

My package with a mixture of three squads of 12  with two squad leaders/asst squad leaders, a bar gunner and an ammo bearer per squad.  There is also PSG and PL, Bazooka team and runner to complete the HQ section.  This provides enough minis to field the standard US infantry platoon for Chain of Command.


The kick-starter also came with a two-man flame thrower team that I can add in if the mission requires.  I haven't added any division patches or stripes yet, as I am still considering what I want to do with them.  I am tempted to use either 1ID or 29th ID to keep them as regulars, but something in my background thinks maybe Armored Infantry would be better.  Perhaps some Old Ironside's patches and some Half Tracks in their future?   That would also necessitate a tank....
28mm Chain of Command US Army WWII