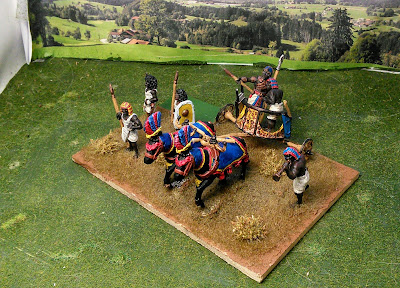 BTD's Pharaoh's Chariot has proved something of a challenge for me.   Every time I think I am close to getting it done, another issue crops up.  Overall, it is a nice model, although I find the cab an exceptionally tight fit for the two riders.  (The driver is cast to be crouched down gripping the reins, but looks like he just wants his boss to give him a hug).) 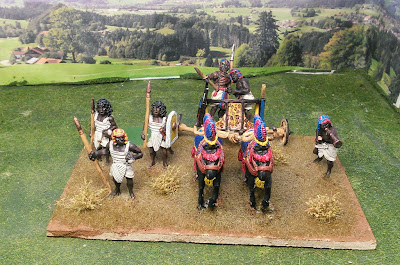 I made an attempt at a Leopard skin for the Chariot cover, which is a decent work in progress, and something I will attempt to revisit in the future.  I originally did the horses in white, but found the mix with the red, blue and yellow to reminiscent of a Wonderbread wrapper. I think the black looks a little more regal.

For the chariot runners, I opted to use a trumpeter from the NKE command group pack and a trio of Spearmen.  Challenge #2 arose when I realized that the shields were nowhere to be found.   Ah well, just another opportunity for improvement in the future.

The biggest issue appeared a couple days after basing the model 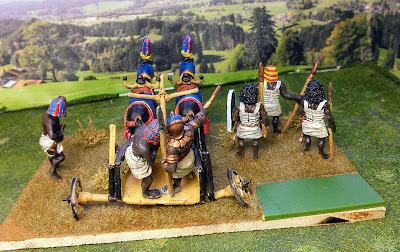 The soft metal used to cast the axle could not bear the weight of the assembled model itself.  I considered drilling and pinning both wheels, but opted instead for a more field expedient solution.. 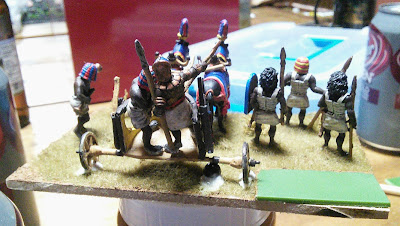 Not the most elegant solution, but it works.  I am shelving this model for how as it is at least table ready, although I plan to either redo it or replace it with a Warlord or 1st Corps model in the future.  I think the armored horses and riders would be more befitting of a Kushite Pharaoh and his retinue.
28mm Ancients Black Tree Designs Egyptian Impetus