Another fantasy unit to augment the Landsknecht.  In this case the "Royal Guard" that look like they might fit in as Reiksguard Foot for a WHFB (RIP) Empire (RIP) Army.  There are only three castings in this case, one standing, one advancing and a standard bearer.  Based on the time period I would have preferred double handed weapons, but perhaps those will be release over time. 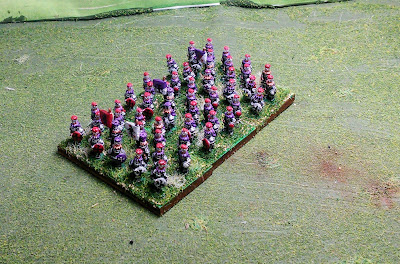 I opted to paint these up next as they seemed an easy unit to knock out and get back in the knack for 6mm painting.  They are predominantly armor plate, so I went with a black undercoat/plate armor drybrush.  I picked all the shields and headdresses out in white, so the reds and purples would pop better.  I had enough to do three stands, so this should work as three separate units or one unit for Warmaster.
2016 6mm Empire Fantasy Microworld Games Renaissance Warmaster