Three months ago I set some goals for 2014, with the first quarter of the year out of the way, I want to see how I am doing.

At this point I wanted to have completed:


Goal 1 - Complete unfinished projects. (I already own the figs)

6mm Austrian Landwehr - Complete by March 30  I have not even touched my 6mm Napoleonics yet this year, and I have more that I had hoped to complete by the end of this month.  Revised goal French Imperial Guard and Remaining Austrians complete by May 31st.

28mm Abayyid/Saracen Force - Complete Infantry-Cavalry formations for basic Impetus Army February 28th.  -Some success I completed my Light Cavalry formations and all my stocks back in February, however delays in picking up my BTD order from Jon, has set back my timeline.  They just got primered, so I should see the completion of my Cavalry formations in the next six weeks.


28mm Crusader Force - Complete two additional Cavalry units and four foot by February 28th. 50% completion.  I painted 1 box of Fireforge plastics last month and just completed 1 stand of cavalry is just getting the final touches to the basing.  Once the second box of figs arrived, I will be able to tackle these to complete my Calatrava force.

28mm Lansknecht - Paint three units of Swordsman for Impetus Jan 30th.  A more than resounding success.  I completed these 12 figures and then did an additional 111 for good measure.  Then I branched out to do some cavalry and artillery as well.

1/285 Modern - Complete Modern Chinese Brigade (Figures airbrushed, but not detailed) March 15th. Another dismal failure, I have not touched a modern 6mm Fig for quite some time.  I will probably get the itch to try again after annual training this summer.

Rebase/Rehabilitate 28mm Warhammer Cavalry. February 15th - All of my Empire cavalry formations are now up to date and settled nicely into their new home 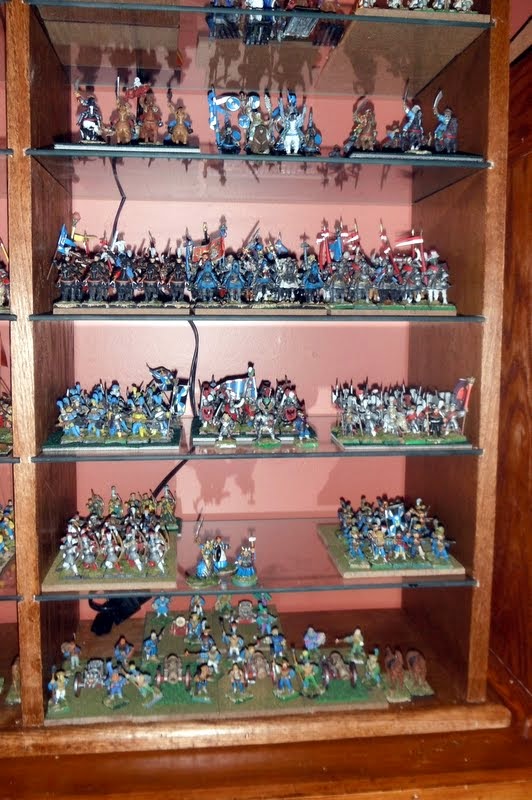 The project has gone so well, that I am going to expand it to fit my other long-neglected rejuvenation project 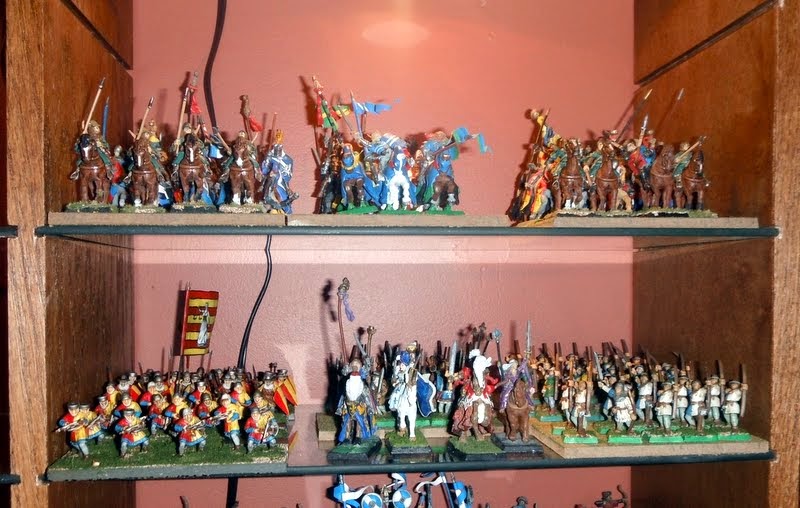 Beyond the goals listed, I have managed to complete a large backlog of 6mm Terrain pieces and buildings as well as all of my 6mm Arab light cavalry.  I have painted a little over "2000 points" worth of figs this quarter which puts me on pace to exceed last years output.

It would appear that I have made two new army goals for this year. My Landsknecht force has gone from being a small project to its own juggernaut 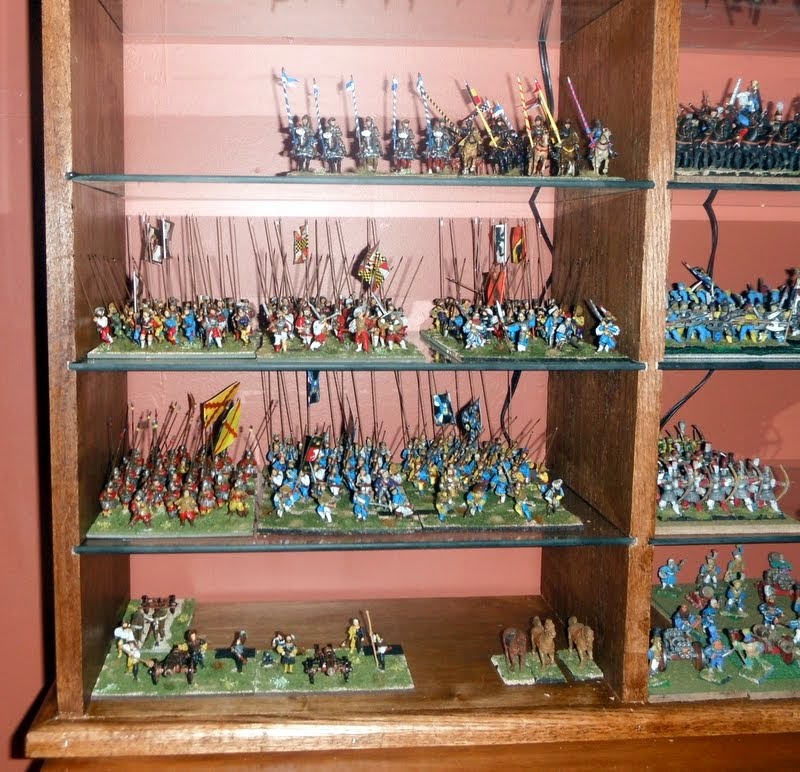 I still have some artillery and a large amount of cavalry to complete.  Eventually I will probably paint some Handgunners rather than using the Empire ones.

My Viking group is technically a new Army I suppose.... 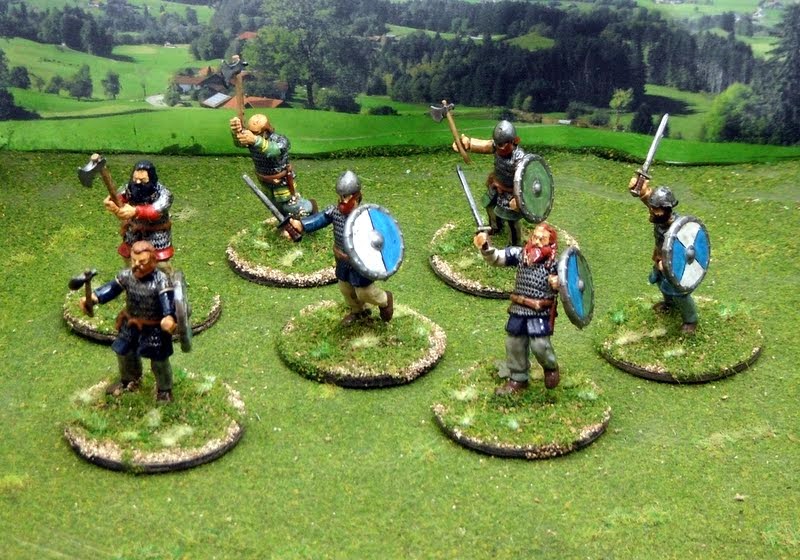 Well this week was spring break, so I took the time to clean out The Den once again.  As you can above, I also used the time to complete my third display case

I went with a different design from the other two as I needed some taller shelves to fit all of the pike-men.  There are a large number of empty shelves for now, but I actually have more than enough 15mm Nappies and ACW painted and based in storage to more than overwhelm them.  What a hobby. 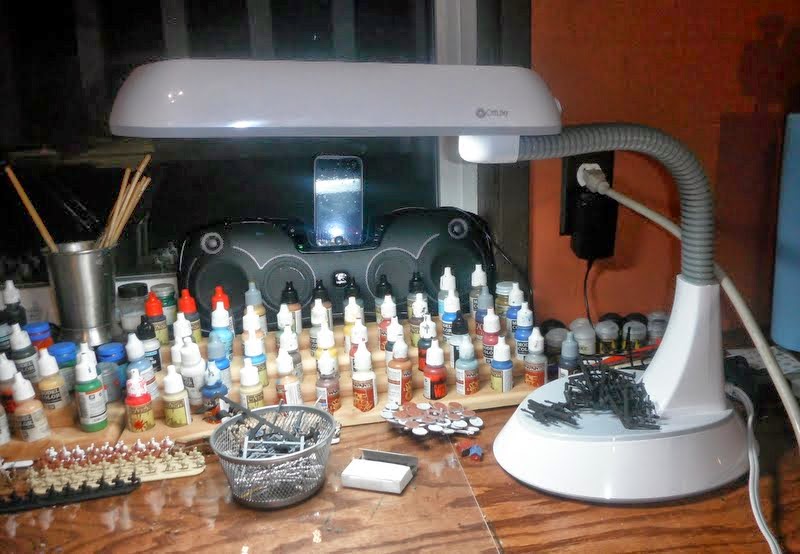 My other new addition is a replacement lamp for my painting table.  I was discussing lighting options with my wife when she suggested trying JoAnn fabrics or Michael's Crafts.  Both companies carry a wide variety of full spectrum lighting meant to help with quilting and fine needle work.  As a bonus, it is easy to get at least 40%-50% off thanks to the coupon carpet bombing campaigns waged by both companies.  I picked this 18W true-color light up for $50.  It is far superior to my old yellow light.
Roll-up The Den