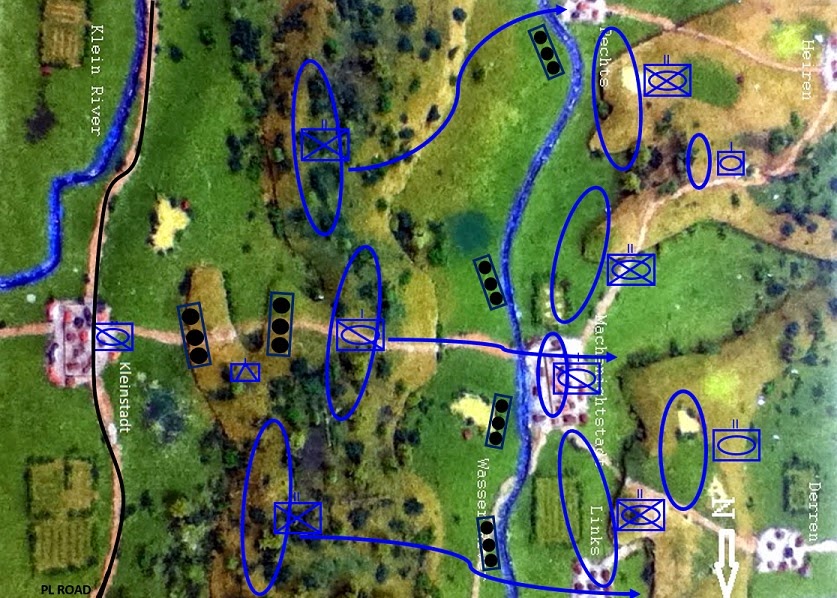 Now with the Order of battle in hand it is time to draw up some hasty plans.  Above is the West German orders in map form.  I haven't transferred all of my files to my new computer, so please forgive the lack of proper operational graphics.  One of the strengths of Spearhead is the orders system.  Players establish a plan on the map, and then are forced to stick to the plan unless they can pass a command roll to change it based on the developing situation.  This requires a little forethought into the set-up.

The concept of the operation for the Germans is to establish a covering force along the ridge-line overlooking Kleinstadt to force the Soviets to deploy early as well determine the main axis of the attack.  These units will then fall back across the River and establish a reserve for the main battle.  The Mechanized Infantry battalions will establish defensive positions along the West bank of the river, with the Panzer battalion providing a reserve.

Some examples of quick written orders:


The Soviet Force is a little more straightforward 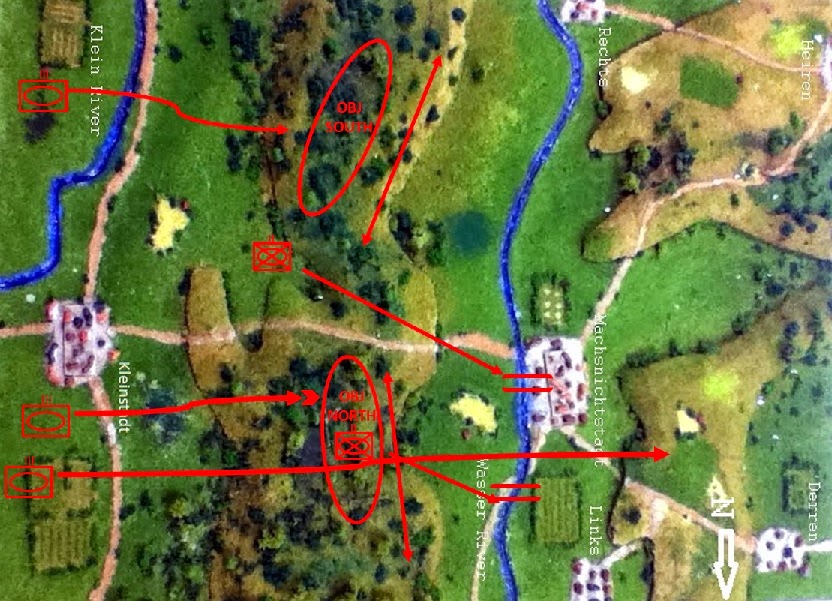 
With that out of the way it is time for the pre-game.

First up is the reconnaissance roll.  Still want to find a better mechanic, but here is what I came up with.  The German mission is primarily counter-reconnaissance, as they are seeking to deny knowledge of their disposition.  They have 2 Lt Recon companies as well organic Recon with each BN.  The USSR has organic recon as well as 1 additional company.   I gave the Germans a National bonus for a total of +5 to the Soviet +3.  A contested die-roll saw the USSR win by 2, so they get a general idea of the West German delaying force disposition for a +1 for area fire affects on the pregame bombardment.  Like I said, a work in progress.

The Soviets threw all three RAGs and the DAG into the preparatory bombardment.  I go with 2-rolls (D10) per stand with an 8-9 to suppress and 0 to kill.  (9-0 to suppress armor)  The results were not quite in line with the general idea of a savage preparatory bombardment.  I am considering beefing it up with a morale roll or a higher chance of suppression.  Overall NATO lost 1 Milan team and had 5 other stands suppressed. 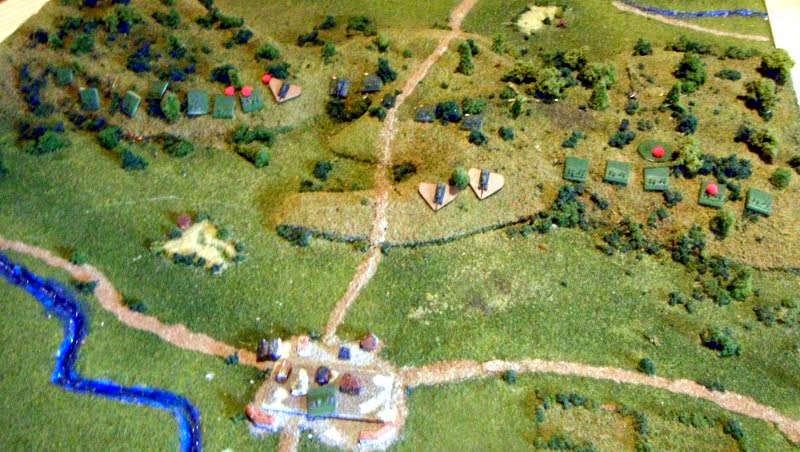 Also, the Soviets have decided to throw a little surprise at the defenders as they really intend on reaching the Rhine within seven days....  It's Slime time!

Three stands of BM21s and 2 FROG 7s were enough to hit both units with non-persistent agents.  I used the D6 system from Modern Spearhead, so it was 3+ to land on target and 4+ kill the stand.  I allowed the clouds to persist for 1 additional turn on a 3+ as well.  German losses were 1 Jaguar, 5 Infantry and 1 BN HQ.  The Security BN in the North essentially ceased to exist.

The Germans were not quiet during this event, the Divisional Artillery dedicated to counter-battery aquired multiple targets and managed to suppress 3 stands of D20s and eliminated a BM21.

Turn 1
Things go from bad to worse for the Germans as the initial onslaught of Soviet armor appear East of the road.

The German positions were still out of spotting range for the Soviets which mattered little as both BNs failed their morale rolls.  The Northern group simply ceased to exist as a formed entity, while the Southern group made for their carriers.

I diced off for the Air battle (contested dice roll, +2 to Germans for air superiority winner can call for Air assets.)  The Germans won the roll and received 2 Flights of F4Gs with Smart Bombs.  1 Flight went in against the Artillery and another against the South most Tank Regiment 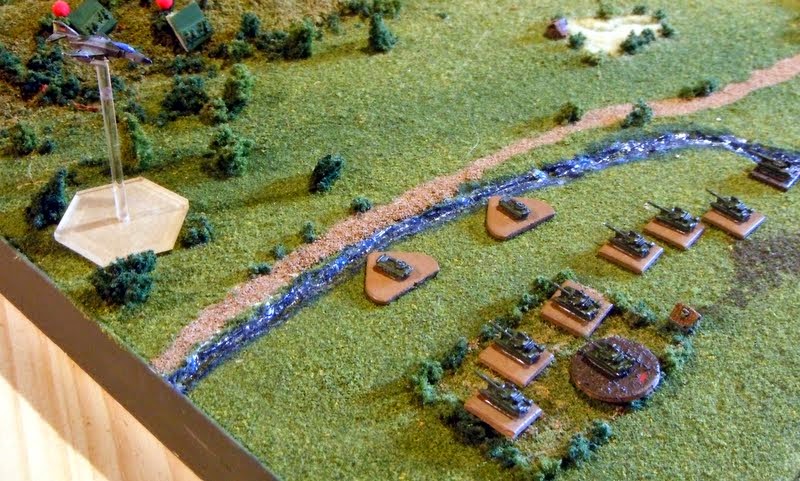 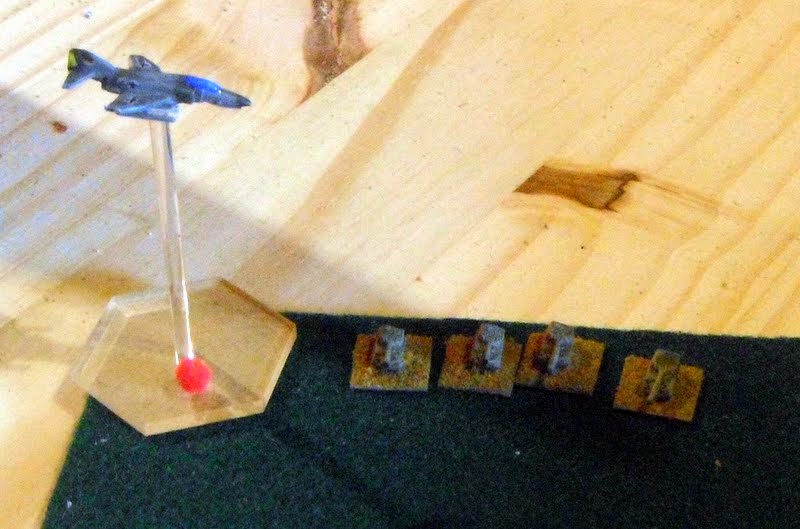 The first sortie managed to evade the Air defense curtain, but the second was hit on the way in and had to abort.  For those interested, the Battlegroup Commander guys came up with a cool "R track" for tracking air mission readiness.  Here is a peak from later in the battle... 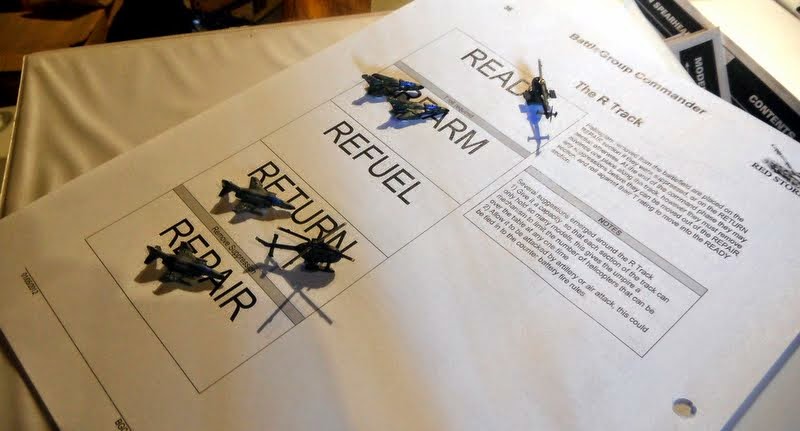 And here is the Soviets 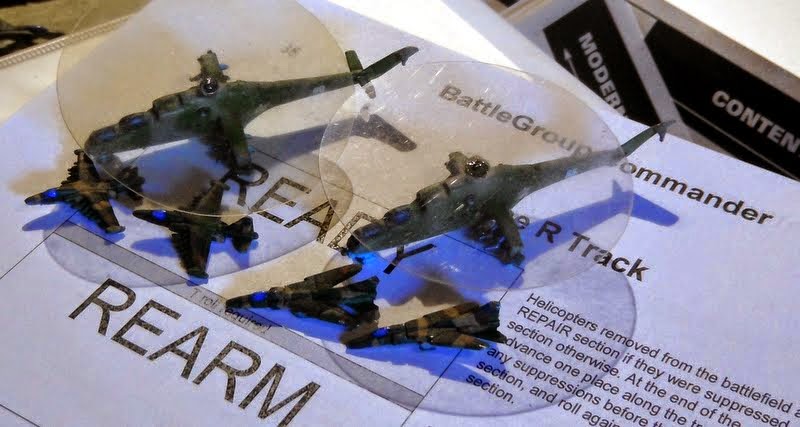 Spoiler alert:  It would stay like this for most of the battle....