Most of the focus for the new year has been on skirmish gaming as large scale games are still in the 'someday' box.  This update includes a mix of figures from several of the modern to near future projects I initiated in 2020.  Above is the last of the Eureka Miniatures Soviet Heavy Weapons from their Afghanistan range.  This is yet another AGS-17 Grenade Launcher which I think brings me up to six total, so technically an AGL platoon for a Soviet MRBN if I get some more BTR-60s. 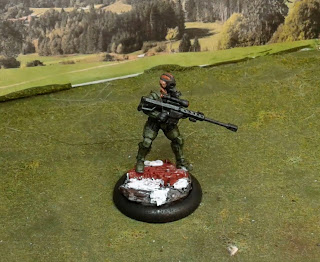 Sliding into the near future, this is my first 'power armor' figure for Zona Alfa.  I opted to use a Brother Vinni "not-Halo" Master Chief figure with a resin gas mask head and Barret sniper rifle to make a fairly hard hitting figure. 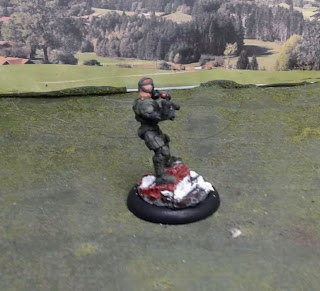 Moving a bit farther into the post Apocalypse, I added a couple models to augment my Peacekeeper force for This is Not a Test.   Including another power armor figure with a more 'retro-fit' and a local scout. 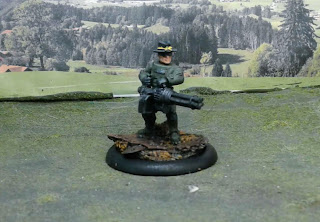 This is another Brother Vinni "Nuclear Playground" figure with one of the optional Peacekeeper heads from TNT.
The local scout is another Brother mini that arrived as part of an order mix-up (I also received four martial arts turtle models I have no idea what to do with...)  She is a fairly cheesecake model with a halter-top and sniper rifle, but I swapped out the slung rifle for a knife, and painted her to partner up with "Gas Mark girl" from the World's End Miniatures range.  Basically allows them to act as a pair of local scouts to help guide the more heavily armed and armored peacekeeper teams. 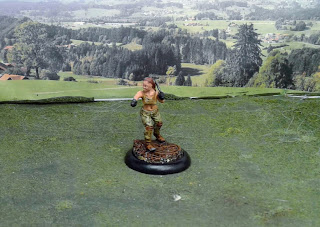 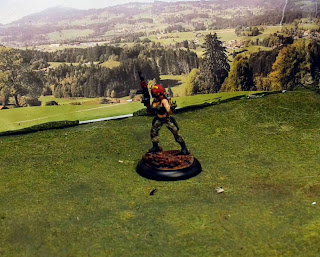 As mentioned in the opener, most the opportunity for gaming has been small skirmish games here at the house with my son.  Most recently we have been doing some linked scenario play using a heavily modified version of zona alfa.  Basically, we swapped the base d10 system for the d20 system used in Easy Eight's Battleground World War II as it better reflects the mini-RPG style of the game.