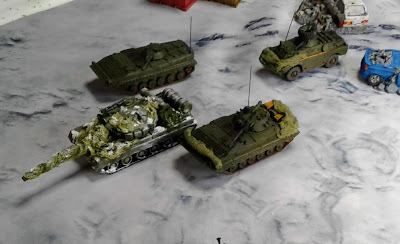 I have been putting a lot of work into my 28mm "Cold War" project of late.  This includes adding more weathering and details to the existing models as well as adding more models overall.  The name is a general catchall as the project includes models for a 1980's era WWIII scenario, the unrest in the Caucasus mountains following the fall of the Soviet Union,  and even some near-term SciFi/post -apocalyptic skirmish.

First up, are some updates to the motor pool.  This includes some new antennae for all of vehicles as well as some dunnage and cammo nets to help add some personality to the 3D printed models.   Finally, I added some new weathering effects each of them for some more experiments.

The latest addition is this 3D-printed BMP-1 I picked up from TheMythicForge on etsy.com.  He sells a variety of Modern and WWII Russian vehicles for a flat $15 fee including shipping.  The service was quick, and the models are well presented.  They are lightweight and durable, which is all I really want from a 28mm skirmish piece. 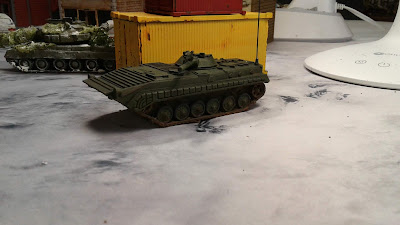 The BMP-2 received some added nettings and dunnage across the back deck.  I really need to find an appropriate 'log' to add to both my BMPs to help with mobility.

The BRDM received a spare tire (mounted on the turret like one I saw in Iraq) and some additional nettings well. 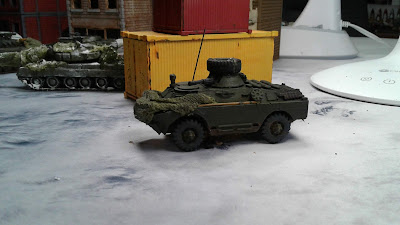 Finally, the BTR received some touch ups to the chipped paint and some more exhaust building up along the back. 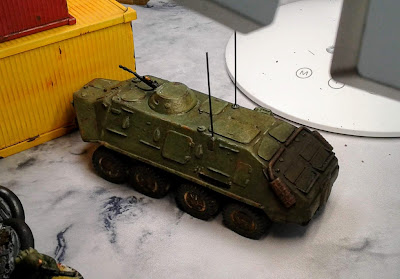 In addition to the vehicles, I managed to finish off some of the 3d printed buildings as well as some extra shipping containers and dumpsters to add to the scatter terrain.  I tried various methods of distress to help make everything look a little more lived in. 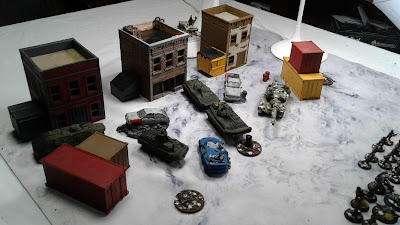 Next up are some of Eureka Miniature's 28mm Soviet Crew Serve weapons.  These are from the Afghan war range, and are some of the nicest they have produced so far.  I did them using the standard KLMK jumpsuits and a quick change to the basing would help them fit in on any potential battlefield.

I picked up the 82mm Mortar team, NSV machine gun and my favorite the SPG-9 recoilless rifle.  I did a mix of group basing and separate bases for where I figured it would make the most sense.  I tend to favor putting all the models on a single base, but that can get in the way of fitting them in appropriate fighting positions on the table. The mortar and HMG teams are cast in pairs and really work best on a single stand.  The SPG 9 is easier to break down, and one of the models can also be used as a forward observer model if you kit-bash in a radio. 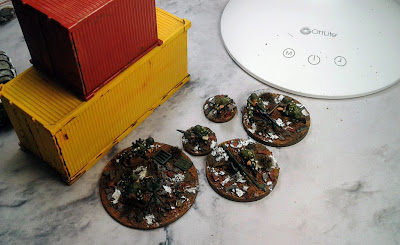 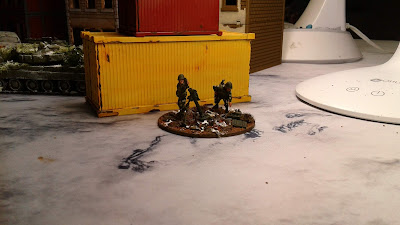 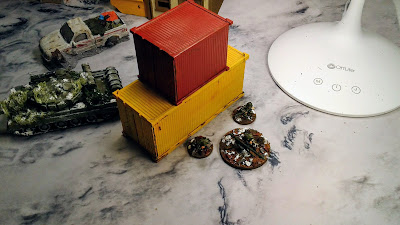 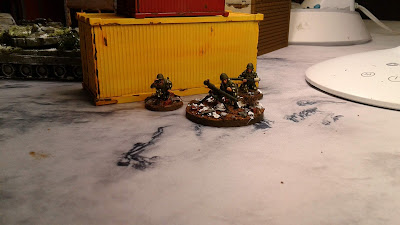 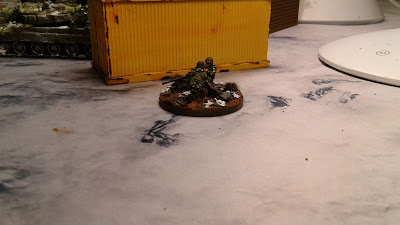 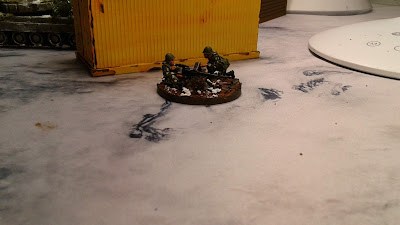 Along with these models, I decided to try an make some objective markers in the form of two mine fields (using some 3d printed mines I found online from a company that did gas mask heads), and a dropped weapon and rucksack by a burn barrel. These could work as scatter terrain as well, I suppose. 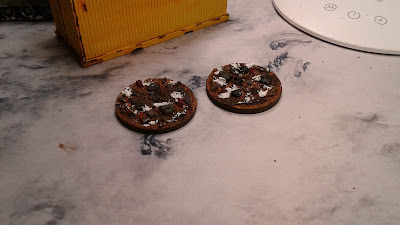 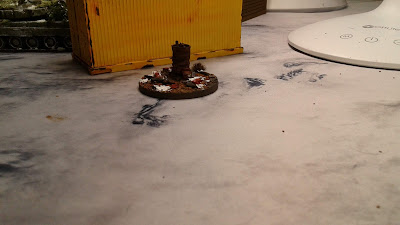 Lastly, I finished off the last four models from my Footsore Modern Ukraine selection.  For these I decided to try a few head swaps to allow them to fit in with earlier periods as well as skirmish games like Zona Alfa. 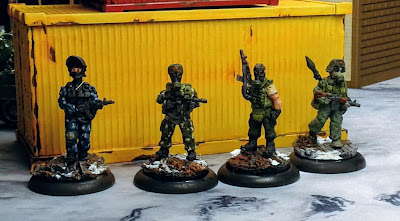 I went with a gas mask/ushanka combo for one model, and then painted up his jumpsuit to match the MOPP suits I did on the earlier Soviet models I picked up from Eureka.  Another received a ballistic helmet from a TNT mini to go along with his police-style urban camouflage.  I think he works rather effectively as a police model with some enhanced tactical gear. 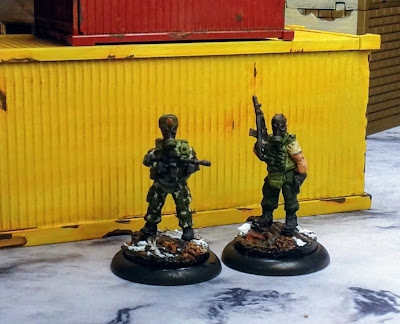 The other two just received gas masks, with one getting a KLMK jump suit and the other seeming to not understand that basic skin protection would also be advisable in a chemical environment....
That exhausts the current supply of Footsore moderns, and should stay that way for awhile unless they release something from an earlier period that the last decade. 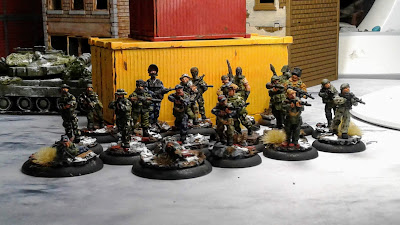 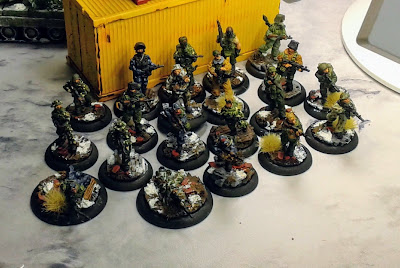 A fairly large update for this project.  In the near term I plan on focusing on picking up some appropriate terrain as well as adding some more of the Eureka 28mm Russian infantry to the mix.  But at least they are historical.....
28mm Chechnya Cold War Russia Zona Alfa