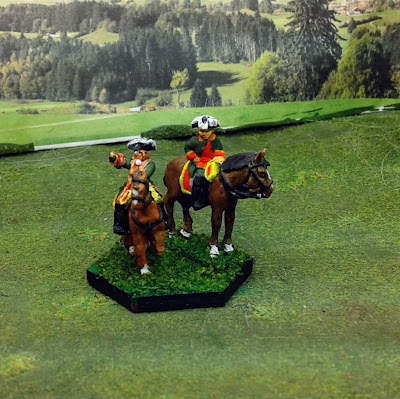 A couple of weeks ago Jon hosted a massive re-fight of the Battle of Kunersdorf using his 18mm Prussians versus the Russian Army I assembled for our 260th anniversary game of Zorndorf.  Imagine my shame and horror upon discovering that my efforts were insufficient to actually cover the forces arrayed at Kunersdorf as well!  I was short fully eight Infantry Regiments as well as several cavalry regiments and a command stand.  Jon was able to provide six additional regiments of Russians and make of the other shortfalls with Austrian proxies.   We played the first half of the scenario back in December, so I decided to at least tackle some of my on-hand minis to start addressing the shortfall before our continuation this month.

First up then is a another Russian Commander using a Blue Moon General and Eureka Colonel.  This will have to be a temporary fix as the Eureka model appears at least 20% larger on the stand.  (so much for '18mm') 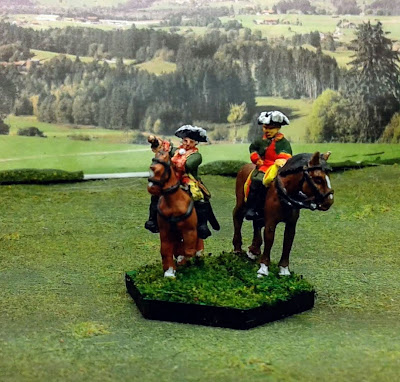 Secondly, I had a set of Eureka miniatures Curassiers on-hand to build another regiment.  These are technically incorrect as the Russians only had two Curassier regiments that actually wore breastplates, but I really like the dynamic poses provided by the Eureka castings.  I haven't decided on a regiment yet, so they will remain without a flag for now. 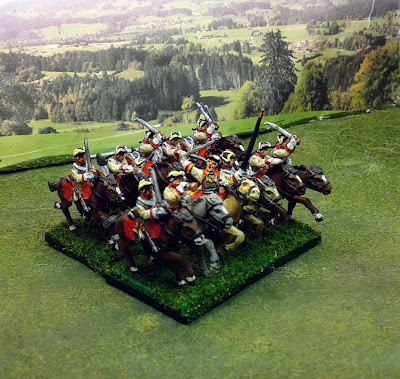 I tried something different with my approach to painting these as an experiment with contrast paints.  I primered the models with a light grey spray and then bock painted all of the colors.  Next I went over all of the colors again using the contrast paints to add depth and shading.  I hit the models with some dullcote and then drybrushed on the highlights.  Overall worked rather well, and I didn't feel the need to hit them with MinWax either.  My only quibble with the Eureka castings is the fragility of the sabers in the extended poses.  Two were bent in the back, and detached during the painting process.  I may try to replace them with some small pins when I get some new bits for my pin vice. 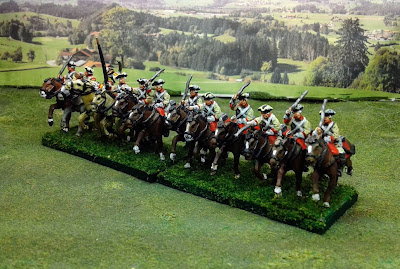 Scratching through the lead-pile reveals enough Grenadier models to do at least four stands of combined grenadiers as well as two regiments of Cossacks.  I can find no record as to the dispensation of the combined grenadiers at Kunersdorf, but I suppose I should at least clear out the pile this year. Long term, this may be the excuse to actually paint some more Mounted Grenadiers to add to the collection.
18mm Honours of war Russia SYW Zorndorf