Before applying the concept in war planning, therefore, we must ask ourselves whether we can consider the enemy to act as a single entity. If so, we should look for connections among the various parts of an adversary, or adversaries, in order to determine what holds them together - ANTULIO J. ECHEVARRIA II
Those disinterested in military theory and grognard navel gazing are best advised to hit the back button on their browser now. I really should provide footnotes and annotations, but this is not a research paper (just a nerd with a mental itch). The pontificating gets rather deep ahead…

Several events have lined up of late that has me revisiting this Operational Design in Wargaming project:


Each one of these events is worthy of its own entry, but today I want to focus on the concept of the Center of Gravity (CoG) which seems to tie them together. The concept traces back to our old friend Carl (von Clausewitz) who viewed it as a mental model to allow a commander to ‘impose his will on the enemy, maximize his use of force in the decisive battle and affect the complete destruction of the opponent’s military forces.’ The COG was

“the hub of all power and movement, on which everything depends. That is the point which all our energies should be directed.”

The CoG can be conceptualized as a focal point that when destroyed causes the complete collapse of a military force. Thus a commander must learn to recognize and exploit the enemy’s CoG while simultaneously protecting his own. This is where Clausewitz’s “Schwerpunkt” concept comes in and you start to see some divergence in the interpretations of the experts. (Different authors/translators debate the finer points of ‘source’ (Quelle) versus ‘force’ (Gewicht) for example). It also requires a belief that the enemy force possess enough interdependence (or unity) to act as a single element and thus have focal point. Most interpretations I have seen used in wargaming focus on the idea of a Schwerpunkt where you focus your forces on the table to effect the destruction of a key element of your opponent’s army leading to his inevitable capitulation.

The CoG concept received a revival about 20 years ago as the concept was embraced by the US Army for its 21st Century doctrine.  CoG was officially defined as "the source of power that provides moral or physical strength, freedom of action, or will to act."  This definition embraces the "source of strength" definition.  Stealing from another source:

“The US Army tends to look for a single center of gravity, normally in the principal capability that stands in the way of the accomplishment of its own mission. In short, the army considers a "friendly" CoG as that element—a characteristic, capability, or locality—that enables one's own or allied forces to accomplish their objectives. Conversely, an opponent's CoG is that element that prevents friendly forces from accomplishing their objectives.”

One method of CoG analysis focuses on identifying the connections within an opposing army.  You look at the opponents Critical Capabilities (The things they need to derive their source of power) and then identify how those capabilities are communicated or implemented.  Those become the Critical Vulnerabilities. Where the lines all come together is the CoG. Ask these questions: How are decisions made?  Who makes them? How are they communicated? That gives you some critical capabilities to consider and vulnerabilities to exploit.

So how do we apply this to designing our wargames?

This is the heart of why I wrote this entry.  I try to apply CoG analysis when studying battles for possible scenarios, but struggle to reflect them on the tabletop.  Many popular rule systems lack exploitable connections beyond the simple destruction of elite units to cause morale shifts.  The focus on simple stand up fights and points systems further muddy the waters. Center of Gravity is effects-based rather than capabilities-based.  The rules reflect the real world inter-dependencies and the possibility of exploiting them on the table top.  If an army was historically dependent on central control, but the rules don’t model the limitations in an exploitable way, then it doesn’t matter.  If there is no command and control mechanism in place, than you are essentially left with trying to destroy individual units. Before proceeding, consider the following questions:

Rule systems with a heavy emphasis on Command and Control are usually the easiest to use for modelling the CoG as they provide a way to interfere with an army’s decision cycle. Similarly, if they can effectively model the use of reserves or have a less than totally random friction system, then there is something to work with.

CoG really comes into its own in campaigns and to a lesser extent individual scenarios.  In a campaign, battlefield effects have far-reaching consequences in the overall game. The destruction of a key unit (or its threatened loss) can rout an adversary before the battle itself has culminated. The ability to disrupt command systems can completely alter how players approach each battle.

In scenario design, modeling a  CoG effectively lends itself to more than a simple stand-up fight.  In the San Martino game, for instance. Jon’s scenario included a caveat that if the Sardinians controlled Madonna del Scoperta, that the Austrians would have to roll every turn to see if they retreated.  (upper right corner on the map shown). I.e. It doesn’t matter how things are going between the four divisions slugging it out in the center of the battlefield.  If the Austrians lose the town they lose the battle. In the first fight, Jon found himself in command of the two independent brigades defending the area. It turned into the hardest fought part of the battle. 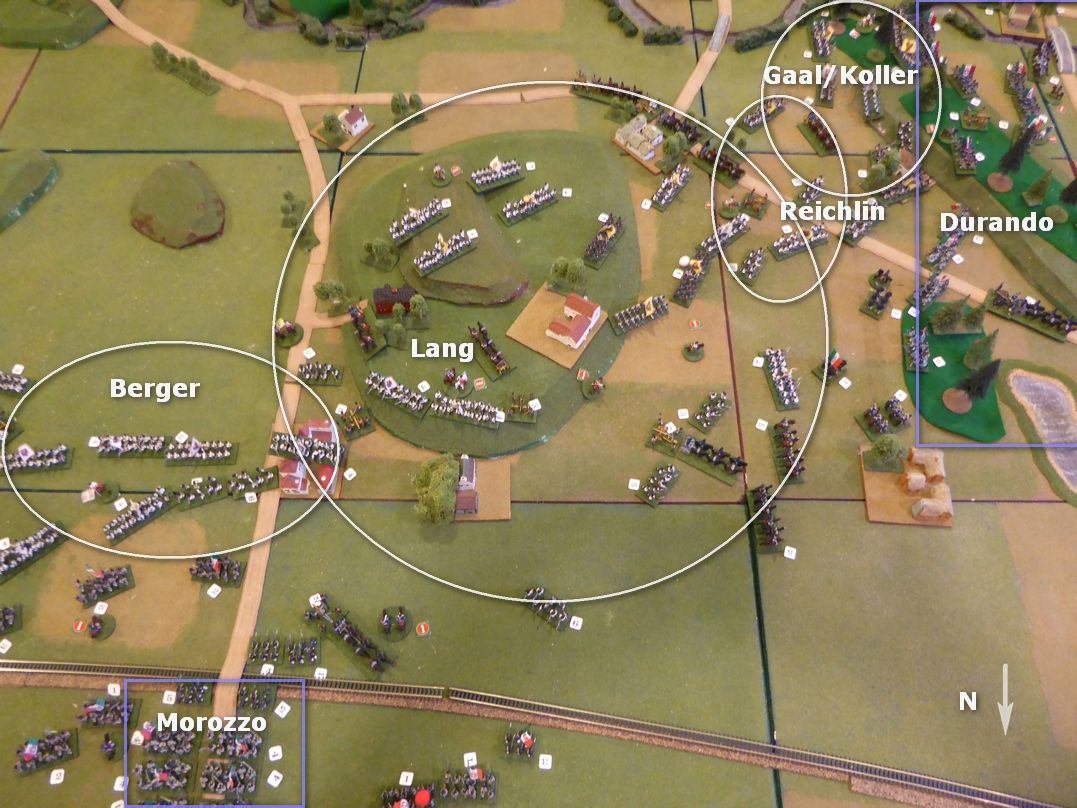 In my own approach to the game, it became my focus for the battle plan.  As my opponent made the drive to seize the town, I changed my plan. I would hold the line with Berger and Lang.  I would then commit the largest portion of my striking power to cut off and annihilate the forces attacking Madonna del Scoperta.  I decided to treat the battle for San Martino heights as nothing more than a delaying action where I would spend my units to buy time.  Gaal and Kollers brigades would establish a strongpoint west of the town and fight to the last if necessary. The game turned out to be a wonderful nail biter for me.  (More so than the apparent one-sided nature of the casualties would indicate.)

Finally, what any of this have to do with explaining historical wargaming to an interested family member?    He peppered me with questions about technology, leaders, organization, unit sizes etc. Basically my answer to all his questions was some variation on “What do you want to represent?”  Are you focusing on the technology? Large scale or small scale battles? Individual or group actions? Do you want freedom to do whatever your want? Fog of war? Atritional warfare?

The answers came back to why I started these little game design rants.  To get to the heart of what I want out of my game play. In this case, a way to model how I can disrupt my opponent's decision cycle rather than just my own.

As an addendum to the above, I would be remiss if I did not point out the obvious: The Center of Gravity can also be the person pushing the models. Sometimes their spirit will break well before the the army on the table. 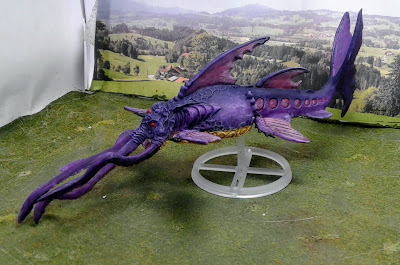 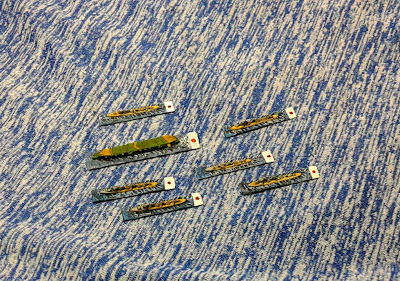