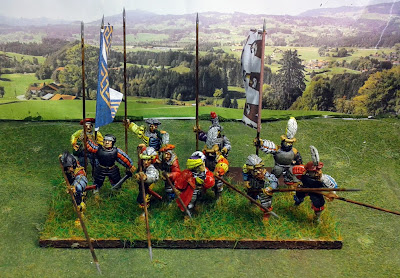 Along with the mounted Crossbowmen I worked on last month, I finally got around to completing a set of pikemen I picked up from Casting Room Miniatures a couple of years ago.  There is a mix of three packs shown here (plus a Foundry captain) The three models in the back left are from the Landsknecht Characters 3 pack.  I like the addition of a couple guys getting properly lubricated prior to combat.  The others are armored models from the 'push of pike' and 'standing' packs.  There is currently only enough models to do a single stand, but the models I picked up from a Landsknechts Kickstarter will mix in with the remaining figures to allow me to do a total of six stands.  Thus these guys are meant to be the front rank of a future unit. 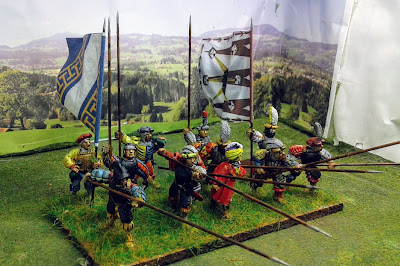