Things have been fairly quiet on the blog concerning the 10mm SYW project that dominated for much of the back half of last year.  So what happened to it?

Well, work and my other work mostly.  The first battle I was planning to do was Chotusitz 1742, the rematch between Frederick's now retrained and reinvigorated cavalry and Austrias more resilient Infantry following the near debacle at  Mollwitz the year prior.  It promised to be a better match-up and was a good planning target for getting units painted and on the table.

My initial OOB based on the Honours of War ruleset: 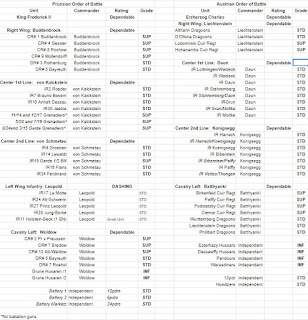 With the completion of the majority of forces, I set up my table and arrayed my forces:

The overall layout for the battle worked out great, but there was one major hitch:  There was no room for maneuver.  My paltry 6'x4' table simply seemed overwhelmed by the mass of figures.  The figure scale also meant that units and ranges would me large enough to result in decisive action in the first couple of turns.  This is problematic as the battle requires Leopold and Buddenbrock to hold while Frederick and Waldow try to assemble their scattered forces and make it to the battlefield.  I decided to try dropping the second stand from each regiment and cutting the movements and a ranges down using Honours of War's 6mm rules instead of my normal 15s.  (60mm frontage rather than 120mm frontage for units)   This resulted in a little more room for movement, and didn't adversely affect the layout:

The most important outcome of the decision is that I could now fit Frederick's divisions on the road coming in from the Northwest, so they could actually advance onto the battlefield as part of the scenario. 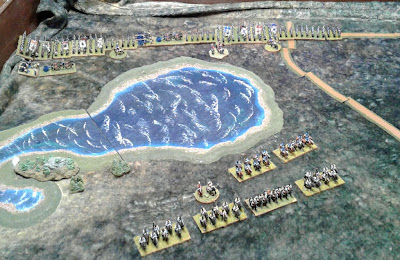 With the forces arrayed, the next problem presented itself:  How to actually fight the battle?  Studious observers of the blog may note that the majority of my games (with opponents of voting age)  take place at Jon's in Spokane.  This is primarily because 1. Jon has a larger collection and bigger table and 2.  People actually live in the city and there are reasons to go to the city as well as play wargames.  I actually live about 100mi south of Jon in a Rural area of Northern Idaho.  I have not had a local opponent in several years, and the last time I managed to host a game was our first outing for the Italian Wars collection back in 2015.

So what to do?  I had a plan, it didn't work. We shall investigate what happened with the next SYW update....
10mm Honours of war Wargame Theory WAS