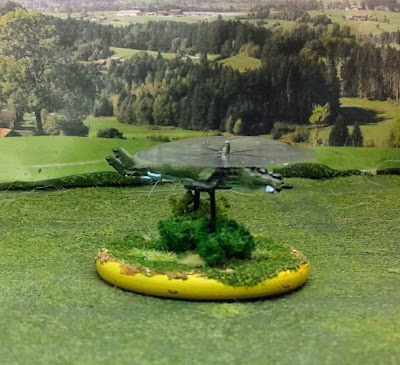 Another break from SYW and Fantasy figs with some cold war era goodness.  This time two flights of MI-24 Hind D's in 3mm.  I tried to paint these in a typical European scheme with enough bright colors to stand out at this scale.  The scale itself is too small for tiny details, so I opted not to try the tail numbers and red stars they would normally sport.

It should come as little surprise that the Mi-24 Hind D is my favorite helicopter of the era.  It was after-all the first image I ever posted on this blog:


The helicopter itself is a beast, and size hard to convey with a simple picture.  I took the photo above while waiting for a UH-60 flight.  We heard a helicopter approaching and the entire building started shaking, enough that several of us went outside to see what was going on.  The photo above is the site that greated us.  (There was also an MI-8 HIP , you can see lurking just behind it, it was a surreal moment for someone who started serving in the Army with the expectation of pumping Sabot rounds into these things in the Fulda Gap.)

I painted two flights for my first outing to provide my Motorized Rifle Regiments with a little fire support from the Army Group.  Perhaps they will be the key to achieving the breakout my Soviet commander needs to unleash his OMG... 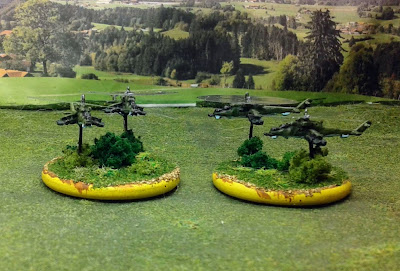 I decided to go with the packaged rotor disks afterall, but am not using the tail rotors.  They are just too small and fiddly to contend with at this scale.  (At least for me.) 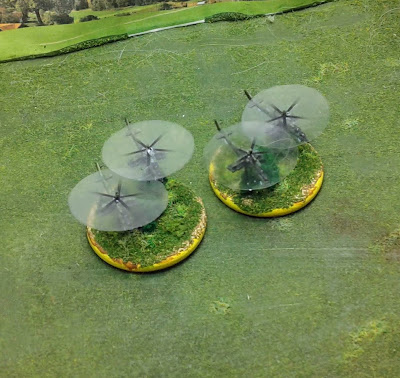 They also tend to obscure the view from above.  Not sure hoe much effort is really needed to paint these, when they are nothing but grey shadows on the board. 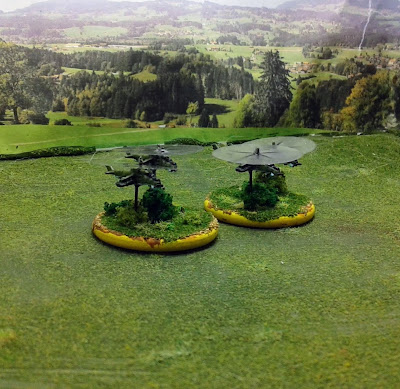 I just finished basing some Apaches, so I will put them up as soon as I get the rotors done.