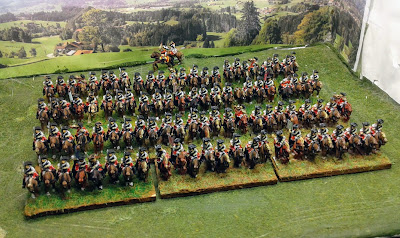 A lot of heavy cavalry is now table ready.  I managed to add two more regiments to the Austrian side including No 1Erzherzog Leopold and No 6 O'Donell.  The regiments now get names, because I found a system for painting banners that seems to work better than trying to print out paper ones.  (The paper standards are so small they look unnaturally stiff and the pixalation washes out detail anyway)

The new standards are small aluminum foil strips glued around the flag poles.  I allowed a thin film of white glue on the outside as well to help the paint hold.  I then painted the standard in the base color and did a free-hand 'shape' of the imperial eagles and regimental symbols.  I then stippled grey, gold or silver around the outside to give the impression of the embroidery.  Finally I used a solid line of white, purple or yellow to represent the outer fringe.  They turned out more than good enough for the 3' (1m) rule. 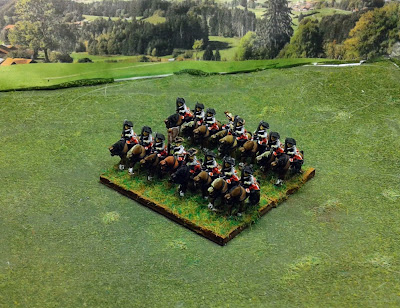 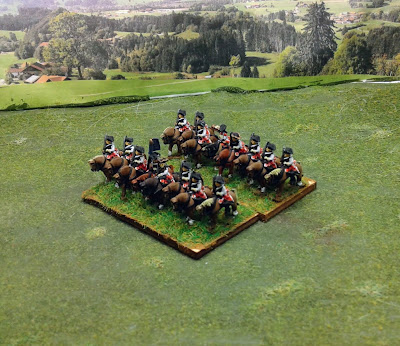 I also added standards to the two regiments I finished previously only to realize I had never actually posted them on the blog!  I also corrected my earlier error and 'repaired' their basing to keep them with 8 riders on-line.  I will continue to use staggered formations for the Dragoons and Hussars, however.  That said, let me introduce Curassier Regiments No 7 Schmerzing (L) and No 11 Anhalt-Zerbst (R) 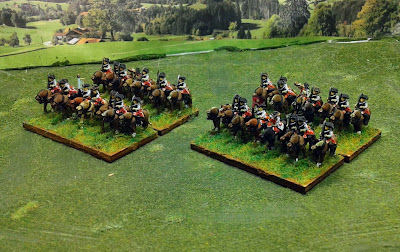 Finally, I finished off an appropriate commander for the heavy cavalry division. 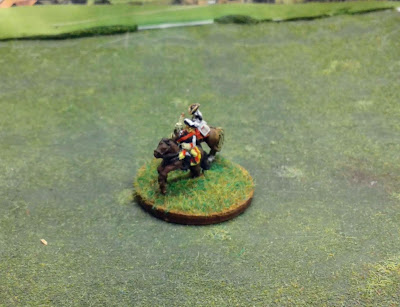 This is actually the Pendraken Siedlitz model painted in Austrian colors with an Austrian command figure from OG accompanying him.  I picked up two of each of the personality models (except King Frederick)  from Pendraken's collection to add some variety to my command stands.

I still have a single pack of Pendraken  Austrian Curassier to complete, so I will probably paint them up as the Modena Curassiers just to add some color variation in as well.
10mm Austrian Honours of war Old Glory Miniatures SYW