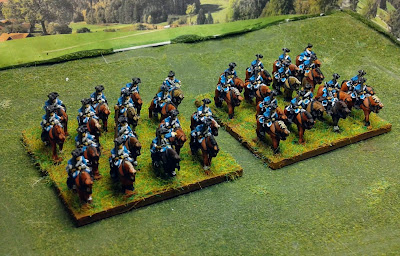 All of my Prussian cavalry completed to date has been various flavors of Hussars, so I thought it time to start adding in the meat of the organization.  First up are two regiments of Prussian Dragoons from Old Glory's 10mm line.  Being completely unoriginal in my approach I opted to start with Dragoon Regiments #1 Normann Dragoons and #2 Blanckensee Dragoons

As with all the other Old Glory castings these are done with separate horses and riders.  This has the advantage of allowing me to pick the castings for each regiment (most of the heavies and mediums will have standing mounts, with chargers for the lights), and makes batch painting much easier (I currently have mounts painted for an additional 10 regiments of cavalry).  The down side is that the riders don't always fit quite right and can fall off with handling  (I recently discovered a Curassier Trooper that had gone missing into the carpet about 2 months ago.)

Pendraken's cavalry all comes in 1 piece, but does come at a comparatively higher cost.  I did a cost breakdown for the Infantry almost exactly 1 year ago.  So perhaps a similar breakdown for the cavalry is in order:

I am currently using 12 figures per regiment for the Hussars and 16 each for the Dragoons and Curassiers.  This normally includes a command group (Commander, Musician for Hussars + Standard Bearer for Dragoons/Curassiers), but plan on doing a couple regiments without to use the excess figures that I accrue from buying figure packs.  This needs to be weighed into the equation, as you will normally be buying packs of 30 Trooper and/or 12 command from Old Glory and single unit packs of 15 models from Pendraken.  Old Glory does a flat $9 shipping charge and Pendraken charges 25% for international orders.  In addition, Old Glory offers their "Old Glory Army" promotion for $50/year that includes a free pack of figures and a 40% discount on all orders.  All cost estimates are based on USD and shipping to the continental US as that is my experience.  Finally, it is important to consider the breadth of the collections as well.  Old Glory's range only includes the Austrians and the Prussians.  While some substitutions can  be made at this scale, the British, French and Russians all have unique uniform features or units that are unrepresented in their line.  Pendraken has expanded their line to include more armies and has some additional cavalry units like Bozniak Lancers for the Prussians.

As mentioned, these figures come with separate riders and mounts.  This makes batch painting easier as well as picking and choosing similar mounts for a unit (i.e. putting all charging mounts or standing mounts in the same group.).

Hussars:  Packs of 30 including two command groups, the Austrian packs also come with 2 standard bearers in Tricorne rather than Busby.  There is only one casting for the Troopers.  The Prussians have two different packs:  Mirletons and Busbys.  Each with 2 commanders and 2 buglers, again there is only one casting of trooper.  A single pack is $17USD ($10.20 for OGA)  Overall cost is $0.57 ($0.34) per fig or about $7 ($4) per 12 figure unit.

Pendraken cavalry come in packs of 15 single-casting models including a commander, standard bearer (including both Austrian and Prussian Hussars), and musician.  There are separate packs for Austrian mounted Grenadiers and Bozniak lancers.  The Prussian Hussars only come with Mirletons, but at this scale you can readily substitute the Austrian Hussars in Busby (with the exception of the bugler who has a tricorne in the Austrian pack)  The standard bearers have flags moulded onto the flagpoles which makes them more robust than the Old Glory models, but only really work well if you want to paint them rather than use paper standards.  A plus for both manufacturers is that the models are comparable in size, so you can mix some figures on the stand.  I base my heavy cavalry in groups of 16, but I can use a spare Old Glory Curassier to round out the unit.  I am also considering ordering some individual standard bearers to replace the Old Glory ones in my units as I like the metal standards.    Overall cost is $0.38 per model  (assuming 1.30 USD to UKP) or $6 per 16 figure unit.  Pendraken has also been good about letting me purchase some individual figures or changing pack configurations to fit my basing schemes.

Cost:  Old Glory Miniatures. With the Old Glory Army card I can get these regiments for about $7 averaged out over total purchases and the $9 flat rate shipping charge.  The Pendraken cost came down significantly given the current weakness of the UKP, but the 25% shipping cost brings the price break out to over $10/ unit.

Economy:  No clear choice.  Separate from individual cost for me is the potential for excess figures.  Given my basing scheme for Hussars for example (12 figures unit)  I can purchase 2 packs of Old Glory Miniatures Hussars and make 5 regiments (1 w/o command) with no leftovers.  For Dragoons and Curassiers 1 bag of command with 2 bags of Troopers gives you 4 regiments (1 w/o command)  and 5 leftover models. In the case of Pendraken, the bundling of command and troopers into 15 figure packs  means that I am always coming up one short for Dragoons and Curassiers.  This can be covered using leftover OG models, or using a general/colonel figure from an existing range.

Sculpts:  Pendraken.  I prefer the one piece sculpts for their durability and ease of painting.  The quality of the sculpts are both good as Pendraken's cavalry look more sleek than the chunkier infantry models, so you can actually mix them on a base.  Pendraken's Curassiers have much more dynamic sculpts, and they convey motion nicely.  The molded flag standard bearers are also nice as I find that a impressionist standard looks much better and is easier to deal with than a tiny folded paper flag.  Old Glory's individual horses make batch painting much easier as well.  The swords on the Pendraken Dragoons are rather flimsy and in a position to readily break, so may require additional care in handling.

Variety:  No clear choice.  Both companies fill some unique slots with OG providing Prussian Hussars with either Mirleton or Busby, and Pendraken does Bosniak Lancers.  Both provide an option for mounted Austrian Grenadiers

Currently I am still planning on doing the lion's share of my cavalry using Old Glory Miniatures, but I did pick up a couple packs of Pendraken Curassier to try them out.  I may add a few more and take the opportunity to replace my existing standard bearers with some more robust models.