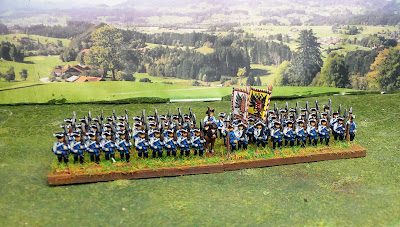 The 10mm onslaught continues with the Royal Netherlands Sachsen-Gotha Infantry Regiment.  I wanted to do a brigade of Austrians with Black leggings and saw a nice fit with the four National Netherlandish Infantry Regiments.  They have the added benefit of having two regiments (Los Rios and Sachsen-Gotha) with colored vests and breeches for the early period which really helps distinguish units at this scale.

I tend to work on these regiments in sets of two or four as I found that one bag of infantry from Old Glory is sufficient to round out two regiments with my current scheme. 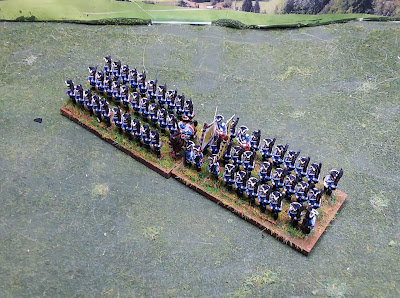 While nearing completion on this regiment I was fortunately to see the Los Rios regiment in Austrian Service post over at Der Alte Fritz Journal.  I had failed to notice the references to the drummers wearing reversed colors prior to 1760.  A quick swish of the brush fixed this oversight.  It is not a major issue, but any opportunity to add a touch of color to an Austrian Army should be taken.  I really like the effect he got with moving the NCOs to make up the 3rd rank with the drummers at the outside corners.  I already had this unit glued down and spackled by that point, but made the change with the upcoming de Ligne regiment.  It looks fairly good at this scale, but unfortunately the options at this scale are rather limited.  Pendraken and Old Glory just do not mix well on the same base.
10mm Austrian Honours of war Old Glory Miniatures SYW