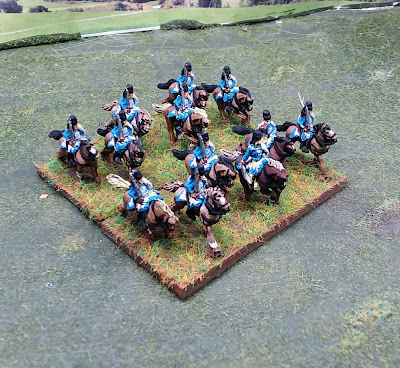 Wow, has it really been a month already?  This is officially my longest hiatus from the blog in its seven years of existence.  Sorry about that.

To commemorate my return, here is Hussar Regiment Nr.4 the Puttkamer Hussars.  I noticed a significant lack of hussars for both sides on the painting table, so I decided to tackle the problem by knocking out several regiments for both sides.  The first unit is thus these Prussian Hussars in mirletons from Old Glory Miniatures.  I opted to go with this unit first primarily because of the color combination (and the moniker :The Wolves)  The regiment was engaged in several of the major battles of the period, and will also provide a nice counter-point to regiment Nr5 "The Black Hussars" that are next up for basing. 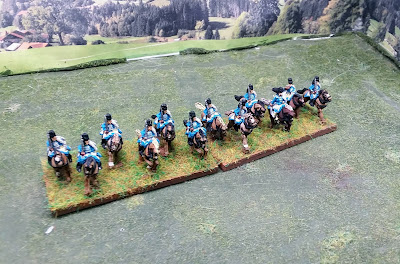 I opted to go with open order basing for the lights, much as I did with the 18mm Russian project.  I think it makes them stand out a little better on the table and helps to better sell the 'mass' of the heavy cavalry regiments to the casual observer.

There is actually a fairly good backlog for me to work through right now.  I have a massive number of models completed that need basing.  Unfortunately, I discovered that my supply of necessary 30x60mm bases in nearly depleted.  My Hungarian division and supporting Hussars will now have to wait for Litko to fill the order.  If what I have heard is true, that may be more rapid than in times long past.  We shall see!
10mm Honours of war Old Glory Miniatures Prussia SYW