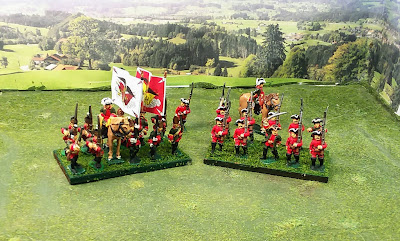 Piggybacking off of Jon's update, I have the last smattering of the Russian elements done for the Zorndorf game scheduled for next Saturday.  These are just the leftovers from units that are already completed.  Unfortunately, there is not yet an opportunity for the completed unit photos as the collection is a 100 miles away (162km) awaiting the battle.

At left is the command stand for the Observation Corps Grenadier Regiment.  I had to wait to get some Eureka Command figures to complete the unit as the Old Glory 15's pack did not come with standard bearers and only one command casting.  It is the most eclectic stand in the force with troopers from Old Glory, NCO from Blue Moon, and Colonel and Standard bearers from Eureka.

On the left is the last battalion for the 5th Observation Corps Musketeers, these are all Eureka miniatures.  In the background are the last two musketeers for the second Battalion as well as a mounted Colonel to round out the Butyrskiy Infantry.

And with that, it is done.  I have managed to complete the entire collection with four days to spare.  I still have a few leftovers I want to complete, but the urgency has definitely died off a bit.  So what does the future of this collection hold?

1.  A Regiment of Eureka Miniatures Curassiers.  I already have more armored Curassier Regiments than I need (Only 2 of the Russian Regiments actually had breastplates apparently), but the active poses on the Eureka castings were far too appealing to pass up.

2.  Six regiments of Cossacks.  I opted to pass on doing the Cossacks for the Zorndorf game as they took no active role in the historical battle.  For the future however, I need to add a contingent for other battles as well to give the army its particular Russian flavor for the time period.  In addition, Jon pointed out, correctly, that the lack of those units on the table creates and artificial deadzone opposite Seydlitz's cavalry.  This provides an ahistorical draw in the player to attack in a location that was unavailable in the real battle.  The god's eye view of the table already leads to enough problems trying to run a historical scenario.  No sense making it worse.

3.  Four combined Grenadier battalion stands.  For Zorndorf, the combined Grenadiers were all left to defend the Wagensberg, so the only Grenadiers I needed were the established Regiments.  In other games, I will need to be able to represent these additional forces.

Not too bad a list.  Stay tuned for the actual battle results in the coming weeks.