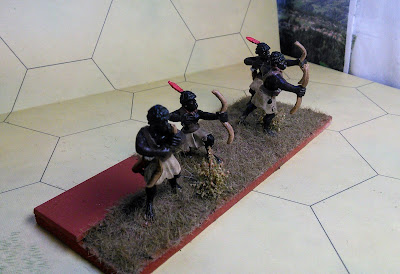 My first skirmisher stands join the battle lines in preparation to face the Assyrian Foe!  I picked up these Nubian Archers from one of Black Tree Designs many sales, to represent some tribal support to my Kushite Egyptians.  The dark skin came out really well with a base of FoW "German Black-Brown" and AP "Oak Brown" highlights.  The only downside is that I need to significantly increase the lighting for my ad hoc "photo studio" 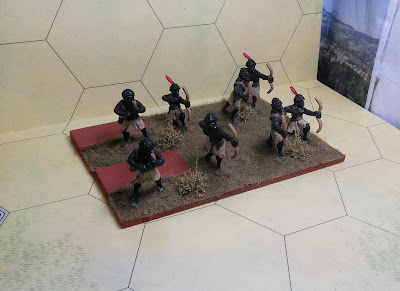 The Assyrian list for Impetus has a lot of diversity with many heavy hitting units.  As my own force is primarily lightly armed spearmen supported by missile troops, I think the battle will hinge on the efforts those missile troops to level the playing field.

So where is the project at now?

That will give me around a 400pt force.  The biggest issue right now is that I need to find a decent source for Kushite cavalry in 28mm.....
28mm Ancients Black Tree Designs Egyptian