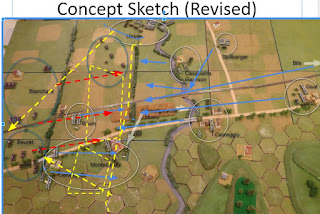 With Jon's account of the conflict entered into the record, here is my summary of the battle.  The initial disposition of forces was the same 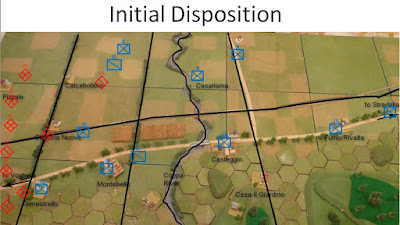 In the first hour, the Austrians put their plan into action.  The front line fell back on Montebello to establish a base of fire.  The delaying force near Genestrello was able to disrupt the French at the cost of one infantry regiment badly mauled.  (they would not partake in the rest of the battle)  The French cavalry made attacks against Hesse's cavalry (giving that force its only participation in the battle.)  Elsewhere, Urban's cavalry was able to take the edge off their French counterparts, but fell back into a reserve position behind the lines to refit.

Paumgarten set his forces in column and pushed hard to get forward.

In the next hour the line of battle came together North of Montebello and a massive exchange of fire developed.  Paumgarten's cavalry managed to come forward allowing parity along the Northern edge.   In the south, the French and Austrian light infantry traded fire in what would be the decisive engagement in the south.  The added weight of the Austrian guns managed to drive them back, turning the French right. 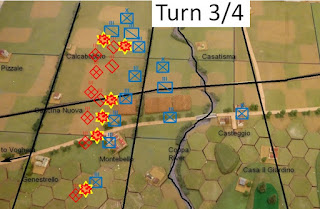 In the last phase of the Game, the French infantry was stopped cold in the center, with much of the cavalry driven back in disorder.  The Austrian line was now firmly established, and a local counterattack threatened to retake Genestrello.  At this point we called the game as the French were no longer in a position to continue offensive operations.  They were still technically in control of the three of the five objectives, but the Austrians were well positioned to take two of them in the next turn. 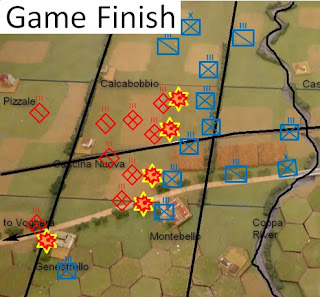 As with the previous games, we ran out of time before the turn limit was met.  In the next turn, I had a difficult choice to make in that I would have to forego activating Urban in the south in order to activate Hesse to get a meaningful chance of a counterattack.   Urban could have readily taken the now undefended Genestrello, but there would be no way to close up the rest of the brigade to drive West off the board. 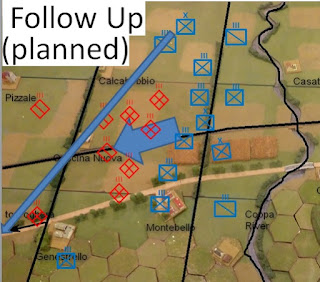 Instead I wanted to try to attack south west with Paumgarten in order to corral the French forward line into a pocket in front of Montebello.  This would allow Hesse to advance at speed across the backfield and take the road.  Austrian casualties would inevitably be much heavier, but many of the French regiments were at the breaking point.

So how did the plan work? 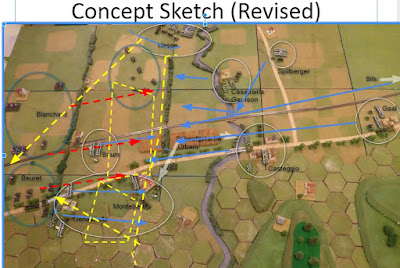 The French force was stopped and roughly handled.  Technically I think it was a draw by points, but we decided that the Austrians could have restored their line in the time remaining.  The major objective, however, was still far out of grasp.  The need to defend farther west than originally planned meant that there was no opportunity to disengage the southern division.  I needed to maintain the fire to keep the French advance in check, and couldn't risk a reprieve that would let them regain the initiative. 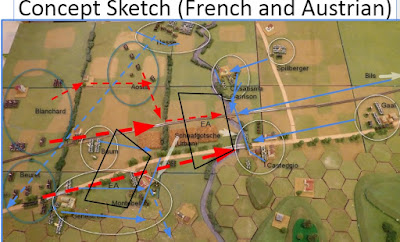 The original plan called for the fight to occur closer to the river. That would have allowed a better hand-off in the south, and given Hesse the freedom to move rather than get tied up with the French main body planted firmly in front of him.

Still, it was an absolutely great time, and the game played very well.  The rules in this game were well crafted, as I never found myself thinking about modifiers and rules in my decision cycle.  The addition of zone of control rules worked well, as I found that I had to realistically consider the position of forces, especially of cavalry, as I could not simply bypass them.  The only problems I had were self inflicted as my mad scramble to get units forward left Paumgarten's division in a intermixed mess.  It would have made any offensive action difficult as I would have needed at least a turn to straighten it out for a general advance.

This concludes this exhaustive study of one particular game scenario.  Hopefully this has provided some food for thought.  As I said in the beginning, this is the prologue for a longer series as I look at the challenges that make this hobby tick for me.  More to come...
Battle report ODW rants Wargame Theory