Getting Biblical for Easter 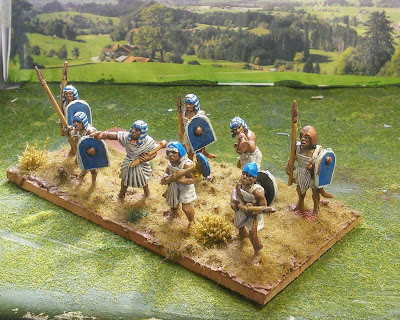 Having finally succumb to peer pressure.  I took advantage of one of BTD's many sales to pick up the start of a Egyptian Army to face Jon's Assyrians.  These models are meant for the New Kingdom era, but should work for the later Kushite period as well.  The Kushite domination of the 25th Dynasty was ostensibly an invasion to reassert the primacy of the old Egyptian gods, so they served to reinforce Egyptian culture (not add to or eliminate it.) 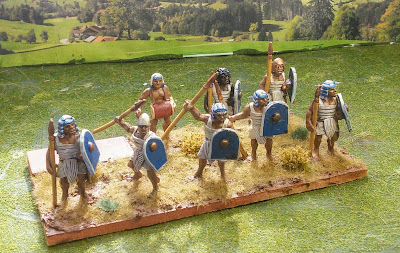 I am sticking with a very basic paint scheme, but allowing the variation to come in the form of skin tones.  There are three essential bases here:  red-brown, leather brown and black-brown to represent the peoples of upper and lower Egypt as well as Northern Sudan. 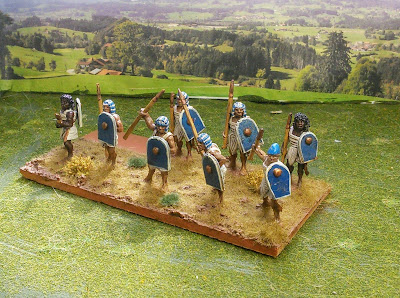 The Impetus force list puts the minimum elements at 6 stands of FL Spearmen, so this is my starting point.  The are organized to let me two stands deep as well. 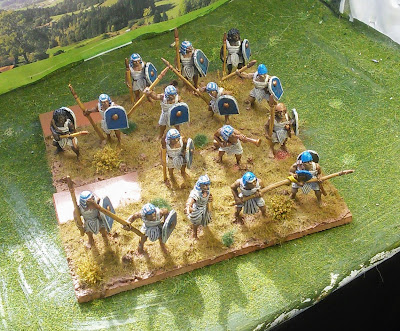 I also decided to try a different basing technique with these as it is a limited project.  The stands are coated in a tinted, coarse painting medium with sand and gravel added.  I then drybrush over that with reddish browns, followed by a light scattering of burnt-grass flock.  It is significantly more time consuming, and rebasing would be a challenge, so it will probably not become my new standard. 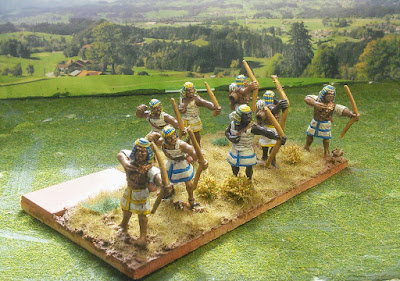 I also completed my first (T) archer stand with a mix of armored archers.  The Kushite led Egyptians seem to be much more archer heavy, so I plan on adding some figures from the Warlord Kushite range as wells as some BTD Numidians to represent  them.

I have some Chariots on the painting table as well, but they may take a bit longer.  I think this counts as my first de-synchronization in the painting plan for the year.  Stay tuned for more!
28mm Ancients Black Tree Designs Egyptian Impetus