Winter blahs and utter humiliation at the hands of a 10 year old.... My hobby motivation seems to be at a low ebb of late.  A fresh round of snow and cold weather is keeping me from sealing the last of my January output.  The hobby room needs a thorough cleaning/reorganizing.  I should probably paint something...

All that said, I did manage to cajole The Boy (c) into playing a few games of Samurai Battles with me.  We tried working our way through the phases of 4th Kawanakijima.  I last tried these scenarios with him when he was a 1st grader, so it provided a prideful parent moment to see what a difference 4 years makes.  There were no modifications to the rules, and nothing held back!

Pushing through the phases of the battle was another fine reminder of my usual struggles with playing the Takeda side of this battle.  The scenarios are intentionally lopsided to reflect the historical situation, which seems to be a hallmark of all the Commands and Colors games.  I was reminded of that last month while listening to the Meeples and Miniatures/Veteran Wargamer crossover podcasts.  (Neil said something about playing both sides and then averaging the results).  One of the things I love about Samurai Battles, however, is the influence of the Dragon Deck.  It can provide some random injects to counter the programmed inequities on the battlefield.  Sadly, these opportunities would not come to pass.

During the phase 1 (Vanguard Attack)  scenario, I tried to fall back on my two heavy units to solidify my line against the superior Uesegi force.  My attempts were quickly undone as Mason achieved a little "synergy" with his cards and managed to ram both Cavalry units into my center and tear up my Ashigaru in short order (My general, Nobushige, died with his entire unit in the first fight.).  Final score 5 - 1 Uesugi

Phase 2 was a more near-run thing.  I was able to isolate the units along the left flank, while my opponent flailed against my center, things were looking promising as I built a 3-1 lead ...and then the command cards dried up.  I found myself unable to continue the assault, and his counter-attack (including two consecutive kills on generals)  brought a rapid culmination to the game.  5-4 Uesugi

Phase 3 - The Tiger of Kai would face the Dragon of Echigo in this battle.  Kenshin led the charge himself, but was cut down by Shingen's trusty shinobi retainer!  With this the tide of battle would turn!

Or not. Following a hard fought battle as forces streamed in to assault the command tent, Shingen's luck (and dice) deserted him.  Both sides lost three stands in the battle, but the fall of the Command Stand resulted in a sudden secession of the battle.  6-3 Uesugi

We got as far as the set-up for the Ford of Amenomiya before the paean call of Minecraft was too much to resist and game-time with Dad was abandoned once again. 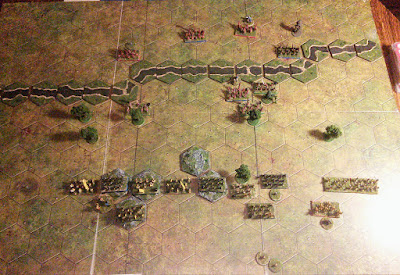 I managed to play several games of CCA with my nephew over Christmas as well, and the game engine has proved popular for quick and easy games.  I am really sold on on the system, and even opted into the p500 for CC: Medieval which is coming up next.  I also think it highlights the advantages of 6mm for me as well.  I get far more use out of my Samurai Battle: Travel Edition than I do with my 15mm figures.  It is easy to set-up and to store.  I am tempted to rebase to get larger stands and units, but I think that would defeat the purpose.

Playing the scenarios does have me thinking of a campaign system however.  While the five phases in the scenario book are sequential within the battle, they are not actually linked.  It would be interesting to find a way to get the results of each one to somehow influence the next, which might get players thinking more about how they use their forces.  The current system rewards all or nothing gambits to get those last banners.  What if I knew that I might need that heavy infantry later?
6mm Father and Son gaming Samurai Battles