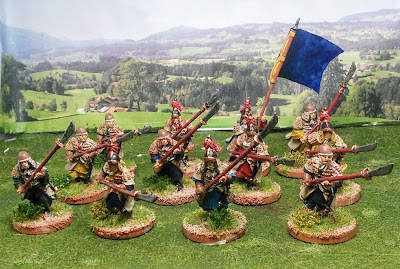 The uptick in temperatures this weekend (and me being laid low by disease) allowed me to complete a few lingering units from January.  First up are the other half of my Korean halberdiers.  I did these in the same tan coat as the first batch, but included variations in lining and underclothes to mix them up.  I opted not to do another leader or musician, but the two units can be combined for larger games. 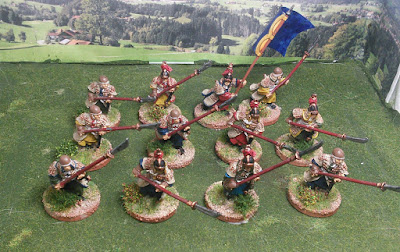 Here is the unit as a mass. 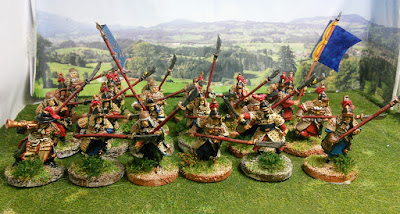 I am still thinking of using these guys primarily for Lion Rampant, however I really see the need to get a solution for unit basing.  I have cut a number of 120mm x 80mm Masonite boards, but I need to get my hands on a drill press to complete the upper portions.  (I tried it with my hand drill, but the holes need to be vertical to get a proper fit.) 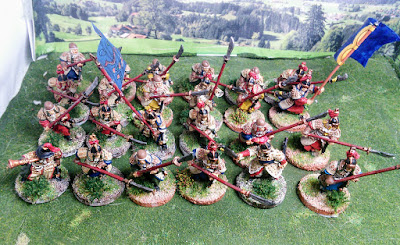 This is it for the pole-arms, I still have spearmen, swordsmen and missile troops to go.  This collection is really coming together in three parts:  1) Righteous Armies (Guerrillas and Monks), 2) Garrison Troops (Spears, Archers, and Artillery) and 3) Regulars (Cavalry, Heavy Infantry, Hand cannon). The Japanese side is more straightforward (Ashigaru and Samurai), but make up for it in the complexity of the paint schemes.  That said, I find the shields for the Korean spearmen and swordsmen to be almost as daunting as doing Samurai Cavalry.