I have actually hit the first benchmark with this project with the completion of my Garrison infantry force.  I knocked out the last 20 soldiers to include some standard bearers.  (For now I settled on the flags available at the Perry Miniatures site, although they are all carrying "Ambush" flags.) 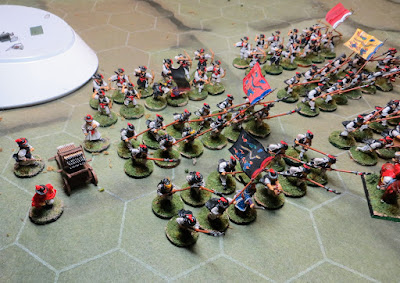 These are set up in groups of 12 for Lion Rampant, but I plan on knocking out the Sabot bases for Impetus before the year is out.  This gives me four units of melee troops with two units of missile support + the artillery. 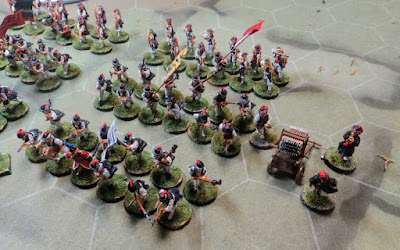 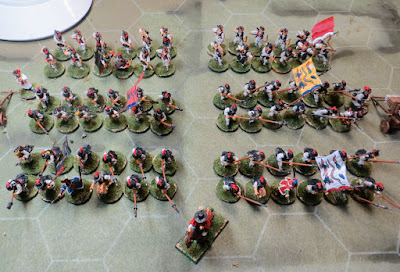 The "Rightous Army" portion of the force has enough Peasant militia at this point, but I plan on adding some Buddhist monk units to fill them out.  The big portion is the heavy infantry, they promise some interesting units including the duel swordsman.  I may have to pick up the mounted version as well.

I also took advantage of the plethora of Black Friday sales to round out several other projects, including picking up the pieces to update the Samurai side of the Imjin project.  I plan on supplementing my Uesegi/Takeda skirmish project with troops from Kato Kiyomasa's 2nd Division.  His group fought engagements across the whole of the Peninsula including taking on the Jurchin riders across the Yalu river.  Also, his mon is a circle which makes some of the detail work easier.
2016 28mm Imjin War Korea Lion rampant Perry Miniatures Samurai Battles